Bill de Blasio seems determined in his remaining months as New York City mayor to add to his already legendary list of gaffes and blunders. Fresh off his latest boneheaded act — which was to issue summonses and arrests to New Yorkers venturing out in public without a face mask — he announced at a press conference on Monday that while the city’s beaches would reopen for the Memorial Day weekend, swimming would remain off-limits. But it wasn’t the restriction that raised eyebrows. Rather it was the manner in which he presented it, which included the threat that anyone who attempted to take a dip would “be taken right out of the water.” (RELATED: De Blasio encourages New Yorkers to rat each other out for not social distancing)

There’s a whole lot of things that will not be allowed at any beach in the state, but you know we’re holding out the hope that at some point we could open up, and we’re training the lifeguards, and we’ll be ready. “No swimming, no sports, no gatherings, no parties. Just common sense, observe social distancing. If you walk on the beach, do it for a limited period of time, get back home like everybody else.”

Join us at City Hall for a COVID-19 update. https://t.co/FWtESgADIF

For me the words conjure up the image of police wielding a gigantic hook that snags the bathing suit of any offender, who is promptly hauled out of the ocean and deposited on the sand like a beached whale.

With his preternatural fondness for strong-arm gestapo-like tactics and language during his two terms as mayor, you almost lose site of the fact that hizzoner hates cops. (RELATED: Police union slams de Blasio for inviting cop hater Colin Kaepernick to speak to prison inmates) 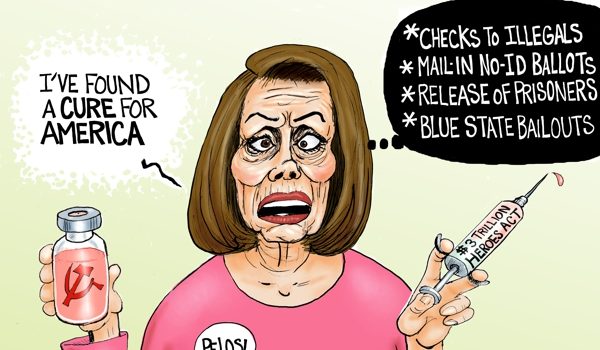