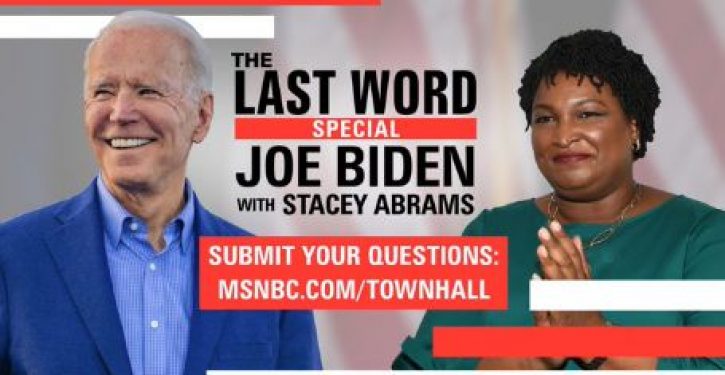 Did Joe Biden forget that April Fools Day was a month and a half ago, or is he just so lacking in brains and social graces that he didn’t understand how his invitation would be construed by Stacey Abrams?

The invitation was to appear live with the former vice president on a special edition of MSNBC’s “Last Word with Lawrence O’Donnell. The event was structured as a phone-in town hall, but almost everyone watching must have had the same sense of the event that Abrams obviously did: that this would be the moment when Biden would ask her to be his running mate.

But instead of asking for her hand in marriage, Biden merely compliments Abrams for having a nice personality.

As you watch the video that follows, keep your eyes trained on Abrams. If you watch carefully enough you can almost see the color drain from her face. Certainly you can see her smile gradually fade into disappointment.

One Twitter user perfectly sums up the experience by quipping “And for your hard work, you’ll get a years subscription to the Jelly Of The Month Club.”

Another provided “before “and “after” shots.

Biden was clearly oblivious to how the event was received — more’s the pity — but if he hadn’t been he could have really turned the screws by announcing that he would have selected Abrams as his running mate had she not already had an important job as Georgia’s governor.

As for the townhall portion of the show, Biden was in rare form. Here he is trying to converse with a pre-recorded question:

Oh nothing much, just Joe Biden trying to converse with a pre-recorded question pic.twitter.com/CEC4Rs5d3T