How far Judge Emmett Sullivan has fallen.  And how fast.  Not long ago he was being hailed as a hero of the war for “discovery” integrity, a judge with a well-earned reputation for demanding that prosecutions conform with the law in turning over exculpatory material to defenses.  That reputation carried him through some increasingly questionable interactions with Michael Flynn and Flynn’s defense, especially after it was taken over by Sidney Powell.

Then, this week, Sullivan made the bizarre move of suddenly deciding to open the Flynn case to amicus curiae briefs.  That isn’t done with criminal cases, to which the statutes regulating amicus procedures don’t apply.

Weirdly, Sullivan didn’t just admit one brief, for which a motion had been filed the previous day.  He solicited amicus briefs if anyone wanted to file them; an extraordinary move, and a reversal of the 24 occasions when Sullivan had already denied motions from third parties to file amicus briefs.

So there’s something going on here.  Sullivan is doing so many things that seem likely to be reversible on appeal, this can’t just be a personal animus against Flynn.  Speculate at your leisure as to what this is about.  It isn’t hard to imagine.  And, as with so many things going on today, it is no longer the “wise” or “temperate” course to assume away what we can all see it probably is.  It is not more likely that Sullivan has lost his mind than that he is under outside pressure.

At any rate, on Wednesday he managed to go his already astonishing performance one better.  Judge Sullivan appointed an amicus, retired Judge John Gleeson, to in essence take over harassing Flynn from the Justice Department, which has moved to drop its case.  Gleeson will be arguing before the court against the DOJ motion to dismiss.

Sullivan – also orders Gleeson to address whether the Court should hold Flynn in contempt for perjury. pic.twitter.com/hAedW6BrSP

Gleeson’s name came up Monday when he published an op-ed in the Washington Post, proclaiming it a trespass against the rule of law for the DOJ to drop its criminal case against Flynn.  So right away we know this is the guy who will do the most sober, balanced, trustworthy job pinch-hitting as a temp-hire prosecutor.

Seems to say a lot about Judge Sullivan's motives.

Even his amicus is biased. pic.twitter.com/egaMGgEPAk

But Gleeson won’t have the freedom to merely roam, unfettered, the universe of ways to assail Flynn with procedural maneuvers.  Sullivan has directed him specifically to look into citing Flynn for contempt for entering a guilty plea (in December 2017), if Flynn wasn’t actually guilty.

As I understand it, a contempt citation would enable Sullivan to incarcerate Flynn, at least for a period of time. I’m not familiar with how long Sullivan can do this, or what the standard is for due process and the protection of Flynn’s rights in such an event.  But it does appear to be an attempt to put Flynn in greater peril on Wednesday than he was in on Tuesday.

Judge Gleeson, incidentally, has the usual connections to the Obamagate cast of characters.

Gleeson's firm was present with Yates during her testimony. pic.twitter.com/5LLrIAxnM9

It turns out that Flynn amicus John Gleeson once worked with (and allegedly supervised) Mueller prosecutor Andrew Weissmann.

Curious if Gleeson and Weissman have talked recently. https://t.co/IDITqYjxXe

(Andrew Weissmann, as it happens, is one of the DOJ prosecutors Sidney Powell thoroughly skewered her 2018 book Licensed to Lie.  She sees him coming from miles away, and isn’t likely to be surprised by him or anyone he worked for.)

The whole thing, meanwhile, looks like a play for time.  In that respect, it’s probably related to what’s going on with the John Durham investigation, and what is about to emerge regarding many of the same Obamagate principals who have a vested interest in the outcome of Michael Flynn’s case.

I’m in sympathy with observers who also think Sullivan is trying to corner President Trump into simply pardoning Flynn.  At this point, given the flagrantly evident bad faith with which Flynn has been treated for nearly four years running, I’m not sure what would be wrong with Trump doing that.  It’s not as if it would make Trump look bad.

Perhaps the point is to frame Trump as partisan, and use that as a defense argument against Obamagate prosecutions by Barr and Durham.  The speciousness of this gambit would be breathtaking. Such an approach would only throw into glaring relief the crippled state of a “justice” system that would actually base its activities on such a Big Lie.  The people can tell the difference between Flynn twisting in the wind for nearly three years as the system abuses its every power trying to destroy him, and the system then scrambling to avert prosecution of its own, by framing the new sheriff as partisan.

It’s painful to see Judge Sullivan melting down.  He needs to be recused from the Flynn case forthwith.  Ideally, he would voluntarily retire from the bench immediately thereafter.  He can no longer be trusted to deal impartial justice. 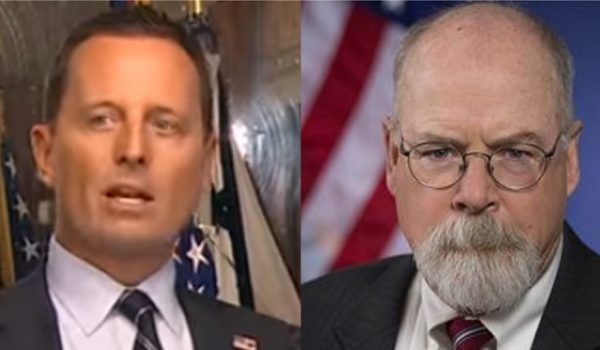 Beyond Biden, Brennan, and Clapper: How Grenell’s satchel tells us this is on the right track
Next Post
Coronavirus reopening: Democrats resist, Americans persist. Here’s why