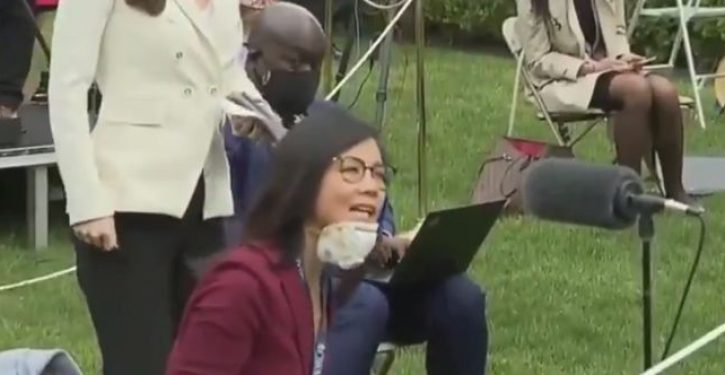 If the White House press corps can’t say anything noncombative at the daily COVID-19 press briefings, they shouldn’t say anything at all. That variation on a piece of sage advice we are taught as children is one that the reporters and correspondents who comprise this group would do well to follow. If nothing else, it would help them do the job they were sent there to do — which is to provide their viewers with answers to trenchant questions.

You’d never guess that was their job description from the way they have been conducting themselves since the outbreak of the coronavirus pandemic. As was noted in these pages in April, the media have been “going out of their way to try to prove their oft-repeated claim that Donald Trump is a liar and incompetent. The level of disrespect in the James S. Brady Press Briefing Room was palpable.”

Yesterday’s briefing was held outdoors, in the Rose Garden, but the level of hostility was every bit as intense. It reached a boiling point when CBS reporter Weijia Jiang asked this confrontational question:

[Inaudible] have said many times that the U.S. is doing far better than any other country when it comes to testing. Why does that matter? Why is this a global competition to you if every day Americans are still losing their lives and we’re still seeing more cases every day?

Most fair-minded people who agree the question was mean-spirited and didn’t deserve an answer — which is perhaps what Donald Trump should have said before moving on to another questioner. Instead he replied, “Well they’re losing their lives everywhere in the world, and maybe that’s a question you should ask China.”

Trump moved on to another question, but Jiang, who is Chinese-American, leaped to her feet and attempted to inject xenophobia into the back-and-forth. “Sir, she demanded to know, “why are you saying that to me. Specifically.” Soon after that, Trump thanked the audience and concluded the briefing.

Notice that CBS resident propagandist @weijia doesn’t ask a question that better informs citizens about the virus? She can’t attack on testing so she tried frame her ? as @realDonaldTrump being cold hearted. When that failed she tried to turn it into a race issue. Vile partisan. pic.twitter.com/2fuh9HoWGn

As a courtesy to Jiang, who hardly deserves courteous treatment, we will answer her question: The president sees a need to emphasize America’s robust coronavirus testing program because early on he was dogged constantly by the media with reminders that the U.S. was late to the party. On March 26, the New York Times chided, “[T]he United States … continues to lag in tests per capita, according to an analysis of estimates from the COVID Tracking Project.” On Apr. 7, the Washington Post ran an article praising New Zealand for its “huge increase in testing” and concomitant decline in new cases, adding that the approach there — “’elimination’ rather than the ‘containment’ goal of the United States and other Western countries — is working.”

It wasn’t only the media that hammered Trump over his handling of testing and other aspects of the pandemic. On Apr. 25, Rep. Ayanna Pressley (D-Mass.) said at a virtual press conference, “As far as I’m concerned what’s happening with this administration, it’s akin to war crimes. Criminal negligence, science denial, a sluggish response.”

In short, if anyone has made the issues of testing and overall response to the pandemic into a worldwide pissing contest, it has been the Left.