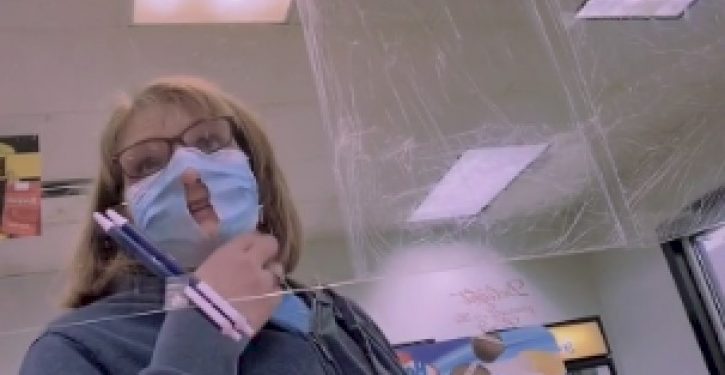 You wouldn’t think that wearing a face mask in a manner that conforms to safety procedures outlined by health officials would be all that difficult. But you’d think wrong. As a New York Times primer titled “How NOT to Wear a Mask” advised back in early April, “One of the biggest mistakes people make is that they fidget with their masks, and pull them under their noses or completely off their faces to rest under their chins.”

For those who might have doubted the legitimacy of the advice, the article quoted Shan Soe-Lin, a lecturer at the Yale Jackson Institute for Global Affairs, who admonished, “You should absolutely not be pulling up and putting down your mask while you’re out. If you’re going to go to the trouble of using a mask, leave it on.”

That sounds easy enough, but as the photo below reveals, Nancy Pelosi, who wears a silk scarf pulled over her mouth and nose bandito-style, tends to pull the garment down under her chin whenever she speaks — which, as speaker, is often.

Other political leaders and government officials choose to wear no face mask at all, while others refuse for personal reasons. Among the latter is Ohio state representative Nino Vitale, who announced Monday  that he won’t wear a face mask because faces are the “likeness of God.”

And then there’s the woman below who was captured walking into a convenience store. The New York Post notes that the video was captured by a gas station clerk, who posted the footage to TikTok.

“Where did you get that mask from?” he asked the woman as she approached the counter.

“Well, since we have to wear them and it makes it hard to breathe, this makes it a lot easier to breathe,” she replied.

Joking, the bemused clerk responded, “Cutting it? Yeah, I’ll do that too, thanks for the advice.”

Covidiot, should the term be unfamiliar, was coined by Urban dictionary to apply to “someone who ignores the warnings regarding public health or safety” in the era of COVID-19.

New York Times columnist awarded for fake news
Next Post
Keep your social distance, to save lives and jobs