A new Rasmussen poll finds that 34% of likely voters believe Biden rape accuser Tara Reade, while only 24% believe Biden is innocent. Whether an interview the presumptive Democratic nominee gave this morning on MSNBC’s “Morning Joe” will change hearts and minds remains to be seen.

Yesterday, the Washington Free Beacon advertised in a headline that Biden would “face hard-hitting questions from character witness Mika Brzezinski,” which turned out to be an accurate prediction. The co-host, who at times appeared emotional, was relentless in her questioning, referring several times to a comment the former vice president had made in 2018 in connection with the Brett Kavanaugh inquisition. The comment follows, via the Washington Post:

For a woman to come forward in the glaring lights of focus, nationally, you’ve got to start off with the presumption that at least the essence of what she’s talking about is real, whether or not she forgets facts, whether or not it’s been made worse or better over time.

“Is the essence of what she [Tara Reade] is saying real?” Brzezinski demanded to know of Biden.

But he dodged the question, retreating to his earlier claim only that the accusations were untrue and that the assault “never happened.”

Brzezinski never asked the onetime-senator to respond to some of the more explosive claims Reade has leveled at him relating not to the alleged assault but its aftermath. In an interview with the Daily Caller News Foundation, Reade spoke directly to her former boss, asserting:

You ended my career. You ended my job after you assaulted me. … I want you to admit it in public. I want a public apology for calling me a Russian agent and having other people try to smear my character in order to cover your crimes.

“Joe Biden,” Reade said elsewhere in the interview, again addressing Biden, “I want you to release all the personnel records from 1973 to 2009 and be transparent about your office practices.”

The reference is to archives housed at the University of Delaware, which have a curious history of their own. In 2011, according to another Washington Post article, the university said it would keep the papers sealed “for two years after Biden retires from public office.” The collection, the Post notes, fills 1,875 boxes containing committee reports, drafts of legislation, and correspondence. There are also electronic files. But shortly before Biden made his presidential campaign official in April 2019, the university changed its policy, insisting that the documents would remain sealed until two years after Biden “retires from public life,” whatever that means.

When Brzezinski asked whether Biden would unseal the archive now, he demurred, claiming that it wouldn’t contain personnel files and that it could contain fodder that could be used against him in a presidential race. He also argued at one point there are “classified documents” in the archive, which is highly unlikely.

Biden did counter, noting that he had asked the Senate to order the opening of the National Archives, but that may be a red herring his handlers advised him to recommend.

As for the University of Delaware, it has refused to provide a copy of the agreement with Biden detailing the revised release date of the records. Eight members of the school’s board, which decides matter such as this, have monetary ties to Biden.

One point untouched upon in the “Morning Joe” interview was the existence of people in Reade’s personal circle who willingly corroborate her claims. There is also video of a phone call Reade’s later mother made to the Larry King show on CNN that makes specific references to the alleged sexual assault.

Democrats in 2018 were willing to give Kavanuagh accuser Christine Blasey Ford the benefit of the doubt even though she had no witnesses or confidantes.

So where does this leave us? There are still many unanswered questions, and Tara Reade has yet to have her public forum, as Blasey Ford did. If the media get their way, she may never get to present her case to the court of public opinion. The New York Times’s Ben Smith notes the probability that she won’t, equating the situation with that of Bill Clinton’s accusers. The difference is that the media are more transparently biased than they were then. They have already attempted to quash details of the story that may get at the truth. 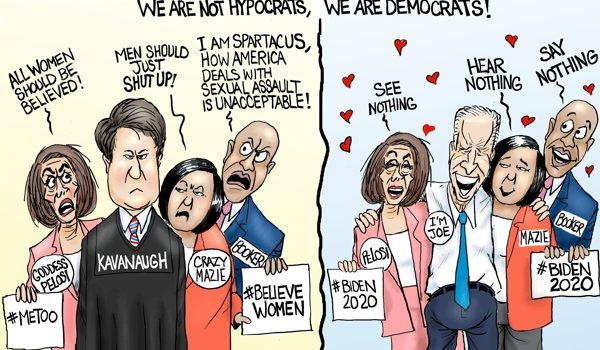