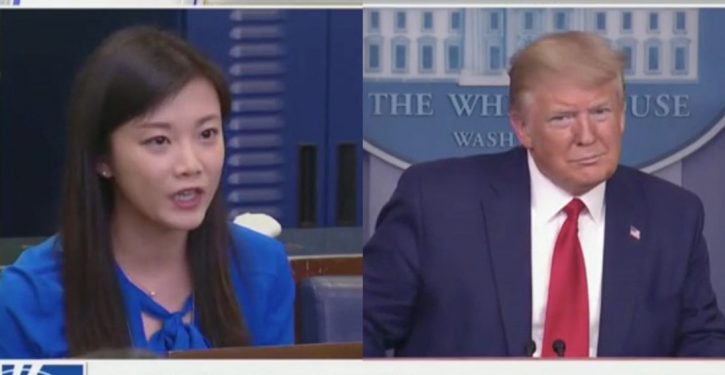 President Donald Trump pressed a reporter on Monday about whether she was working for the Chinese government after she asked a question about medical supplies that Beijing has provided the United States.

The reporter, who said she was with Phoenix TV, a Hong Kong-based outlet sympathetic to Beijing, began her question by noting that the Chinese government and companies like Huawei and Alibaba have donated medical supplies and equipment to the U.S. to handle coronavirus pandemic.

“It’s a statement more than a question,” Trump said after the reporter finished listing off the aid.

Trump then went on a riff about a massive trade deficit between the U.S. and China that he said he has addressed during his administration. (RELATED: NYT Allows Chinese Ambassador To Push Propaganda)

The reporter interjected to ask Trump, “Are you cooperating with China?”

Trump shot back: “Who are your working for, China?”

The reporter said that she works for Phoenix TV.

While Phoenix TV is not wholly owned by the Chinese government, its content is widely considered to be sympathetic to Beijing.

The Hoover Institution regards it as a “quasi-official” news outlet with links to the Chinese government’s ministry of state security.

Freedom House, a pro-democracy think tank, said in a 2017 report that Phoenix TV is owned by a former Chinese military officer with close ties to Beijing officials.

“Moreover, over the past two years, it has been used as an outlet for airing televised confessions by various detained CCP critics, most notably all five Hong Kong booksellers abducted by Chinese security forces in late 2015.”

The Chinese government’s propaganda machine has hyped medical aid that it has provided the United States and other countries during the pandemic.

Chinese officials have downplayed the government’s role in hiding the true extent of the coronavirus outbreak, which began at a wildlife food market in Wuhan.

Home Depot co-founder: Congress should have probed China, coronavirus instead of impeaching Trump
Next Post
Cuomo ties Biden for presidential nomination among Democrats