Joe Biden was thought to be a safe pick when then-Sen. Barack Obama tapped him as his running mate in 2008 because, the thinking went, Biden would be too old to run for president in 2016.

If Biden had won the 2016 election, he would have been the oldest president in history — a title he still might claim in the 2020 election. Biden’s age was long thought to be a barrier to him running for president after Obama’s second term.

FiveThirtyEight’s Nate Silver wrote that Obama “selected a Vice President in Joe Biden who, because of his age, probably will not have Presidential aspirations in 2016.”

“Biden’s age would snuff the last embers of a presidential ambition that led him to a pair of crushing defeats in 1988 and 2008, or so many in Barack Obama’s camp thought when they first tapped him,” a 2012 Politico piece recounted.

Biden is all but certain to secure the Democratic 2020 nomination after another string of primary victories Tuesday, but concerns about his age and fitness for office remain.

The former vice president has racked up a string of gaffes and mental misfires, and Republicans are preparing to make his mental fitness a prominent issue in the 2020 campaign.

Biden’s speeches have become noticeably shorter. On Tuesday, he threatened to slap a Michigan factory worker who challenged him on the issue of gun rights. The Biden campaign didn’t return the Daily Caller News Foundation’s request for comment for this story.

Biden’s advanced age was prominently featured in coverage of his decision whether or not to run in 2016.

Washington Post columnist Ruth Marcus wrote in August 2015 that Biden should run for president in 2016, but on one condition: that he commit to serving one term and rule out a 2020 campaign.

“At 74 on Inauguration Day [2017], Biden would be the oldest president ever, including Ronald Reagan at his second term (just shy of 74),” Marcus wrote at the time.

If Biden wins this year’s election, he would be 78 years old when he takes office in January 2021.

NBC News noted Biden’s age in reporting on his decision to sit out the 2016 elections, which the outlet stated “likely means the 72-year-old’s political career will come to a close with the end of the Obama administration in January of 2017.” 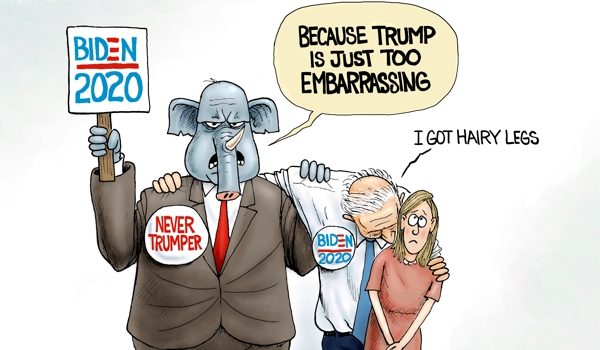 Cartoon of the Day: Creepy guy for president
Next Post
Imagery shows new burial pits in Iran so big they’re visible from space