Now that Joe Biden is edging ever closer to the Democratic nomination, he has got to be giving party leaders second thoughts by opening his mouth. This morning he delivered a speech at a health care town hall at Dartmouth College in Hanover, N.H. According to the student newspaper, The Dartmouth:

In his speech, Biden defended the Affordable Care Act and criticized efforts by the Trump administration to repeal the law. But he also referenced other Democratic presidential candidates who have advocated for undoing the law, also known as Obamacare, in favor of more ambitious plans such as “Medicare for All” — which Biden described as being too expensive and impractical.

So what’s Biden’s recipe for a health care plan that is less expensive plus practical? You can listen to this clip all day long, but you’ll never ferret out a meaning that isn’t self-contradictory if not downright nonsensical. A transcript follows the video:

Biden tells crowd he wants to increase premiums and make sure that healthcare is 'not quality, but only affordable'… pic.twitter.com/fNhtcW7kxx

And for folks in the working class that are below 400, they will in fact will [sic] increase their— their premiums. The public option will be available on my plan. We’ll make sure it’s not quality— we’ll make sure it’s only affordable.

As Kyle Smith writes at National Review, “as of early February the [Democratic] party had decided Joe Biden was the favorite for its presidential nomination. … Then people started to vote, and it turned out they didn’t like Biden at all. He finished fourth in Iowa, fifth in New Hampshire, and a distant second in Nevada. As of last week, the Democrats had decided to be an openly socialist party: Bernie Sanders led 20 consecutive national polls after Iowa, half of them by double digits. And then, this week, Democrats decided not to be socialist after all: They just gave Biden, the doddering avatar of the party establishment, a resounding Super Tuesday victory.”

The toughest question nominee Joe Biden will face come debate time
Next Post
Cartoon of the Day: Mike can’t get it done 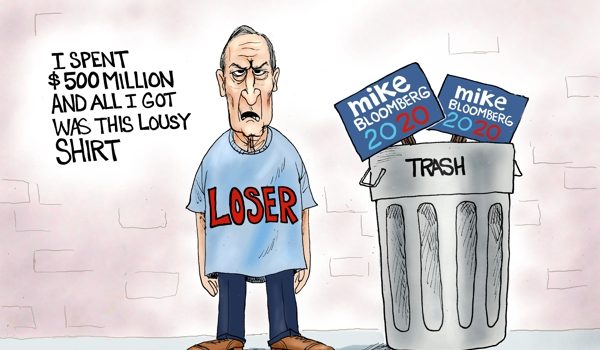