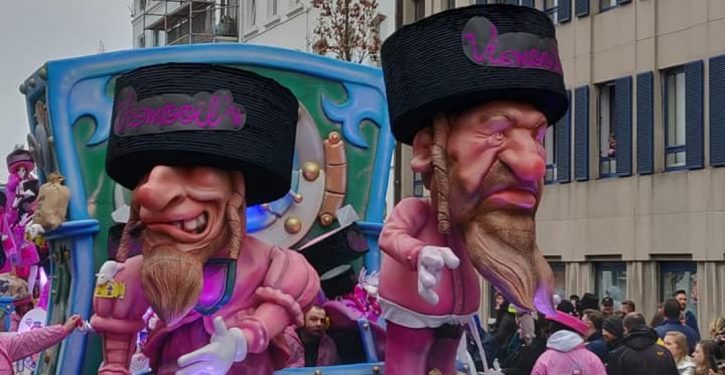 Don’t get them wrong … the citizens of Aalst, Belgium. Sure they donned large fur hats meant to mimic the ones worn by Hasidic Jews, except that these were square. And, sure, they wore long noses and ant costumes. Ant costumes? Hey, get with the pogrom!

At a time when anti-Semitism is rearing its ugly head once again — when one of two nominally Jewish candidates for president of the U.S. proudly posed for a campaign photo with Jew-hating supporter Linda Sarsour — it’s sobering to witness spectacles like this. It’s also disturbing to hear people who should know better writing them off as “harmless.”

According to BBC News:

Peter Van den Bossche said “there isn’t a movement behind it” and “we don’t wish harm to anyone”.

“It’s our parade, our humour, people can do whatever they want,” he said. “It’s a weekend of freedom of speech.”

Freedom of speech? Well, that’s different. In our country, freedom of speech is protected by the Constitution. At least it is sometimes. When the speech in question is troublesome to the Left, constitutional protections go out the window. When organizers of the group “Demand Free Speech” planned to hold a rally in Washington, D.C. in 2019, Antifa announced its own plans for a counter-demonstration. The plans included throwing acid in the faces of pro-free speech attendees.

Back in Aalst, not all of the merry-makers mocked Jews. Some of the marchers were merely dressed as Nazi storm troopers:

Bernie: I’d rather lose than let Bloomberg spend money on me
Next Post
When it comes to public health crises, the Left’s memory is short