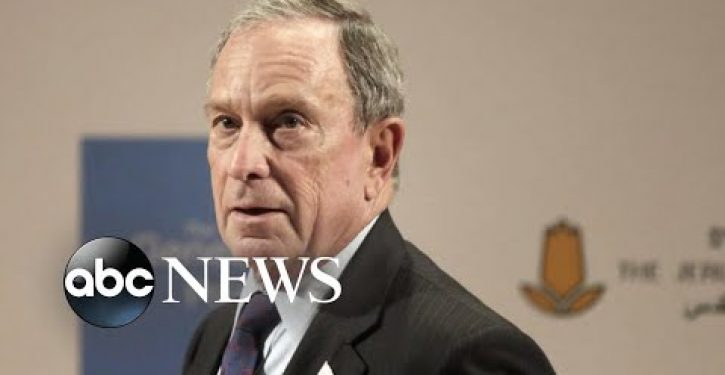 According to the infinite monkey theorem, a monkey hitting keys on a typewriter at random will eventually produce any given text, including the complete works of William Shakespeare. (If you’re wondering where you would find a typewriter for such an experiment in this day and age, I’m willing to bet presidential hopeful Joe Biden has — and still uses — one.)

I would like to propose a corollary to the infinite monkey theorem, which I call the “infinite Bloomberg theorem.” It posits that given enough time, videos will emerge of former New York City Mayor Michael Bloomberg insulting every “protected class” known to liberals. Yesterday I presented Bloomie’s second pass at male minorities, ages 16 to 25. Previously I noted his crass and debasing attacks on women, and on Monday LU’s J.E. Dyer reported on his low opinion of farmers and factory workers.

BuzzFeed has his latest:

And yet, Bloomberg’s campaign published a new video on Tuesday that pledged the former New York City mayor believed in “inclusivity” for “LGBTQ+ youth,” featuring fashion designer Isaac Mizrahi declaring, “Mike is so incredibly sensitive to this issue.”

The video is less than a year old, effectively destroying any claim of “having evolved” the presidential wannabe might make. (The money portion of the video begins at 12:50.)

Bloomberg is certainly earning himself the distinction of being the “equal opportunity” candidate. He seems to hate everyone equally.

Will the $2 billion he’s pledged to devote to his campaign be enough to fill in the deep hole being dug by these constant reminders of his past remarks?