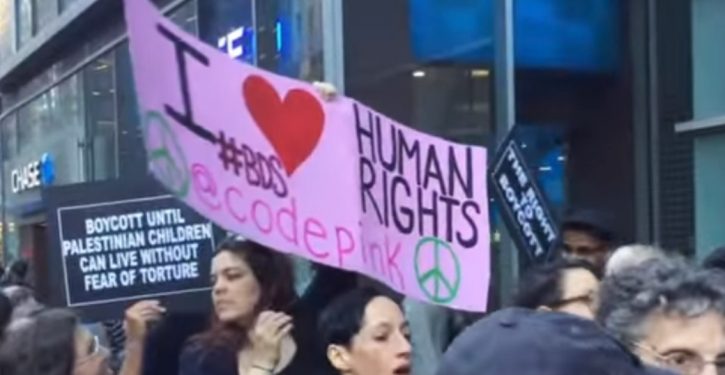 To support the BDS movement, the United Nations Human Rights Council  (UNHRC) on Wednesday published a blacklist of more than 112 companies operating in Judea and Samaria, which the UN calls “occupied territories.” While not the “stated” purpose of the list, its publication will aid those engaging in the anti-Semitic Boycott, Divestment, and Sanction (BDS) movement.

The Office of the High Commissioner for Human Rights (OHCHR) said it had identified 112 business entities,  94 of which are Israeli companies.  Eighteen of them call other countries home, including the United States, Great Britain, France, the Netherlands, Thailand, and Luxembourg. As of yet, there is no word whether or not France surrendered and turned over all of its Jews to the UN.

Among the companies on the UN’s anti-Semitic naughty list are General Mills (say goodbye to Häagen-Dazs and “me” Lucky Charms), Air-BNB, which was boycotting Judea and Samaria for a while, Expedia, Motorola, and Trip Advisor, among others.

Secretary of State Mike Pompeo slammed the release of the list and issued the following statement:

I am outraged that High Commissioner for Human Rights Michelle Bachelet published a database of companies operating in Israeli-controlled territories. The United States has long opposed the creation or release of this database, which was mandated by the discredited UN Human Rights Council in 2016. Its publication only confirms the unrelenting anti-Israel bias so prevalent at the United Nations. The United States has not provided, and will never provide, any information to the Office of the High Commissioner to support compilation of these lists and expresses support for U.S. companies referenced. We call upon all UN member states to join us in rejecting this effort, which facilitates the discriminatory boycott, divestment, and sanction (BDS) campaign and delegitimizes Israel. Attempts to isolate Israel run counter to all of our efforts to build conditions conducive to Israeli-Palestinian negotiations that lead to a comprehensive and enduring peace.

This list was made in conjunction with pro-BDS and PFLP-linked NGOs. All countries targeted by OHCHR, particularly Israel and the United States, should reassess their relationships with Commissioner Bachelet’s office, including canceling all cooperation and the millions of dollars and euros provided to her each year in funding. The maligned companies should begin assessing plans to take legal action against the UN officials who prepared the list and those who will propagate their false claims.

While the publishing of this list is a disgusting example of the UN’s hatred of Jews and Israel, sadly it is not surprising. During her term at the UN, U.S. Ambassador Nikki Haley called the UNHRC the United Nation’s  “greatest failure” and condemned it as a “cesspool of political bias.”

The UN Human Rights Council has been biased against Israel since it was formed in 2006:

That last point is what created the “BDS” list.

I know exactly how you work.

Amazingly out of the 47 countries on the UN’s Human Rights Council, many are human rights violators themselves. The UNHRC member countries with human rights problems of their own include, Angola, Bahrain, Cameroon, the Democratic Republic of the Congo, Eritrea, Indonesia, Libya, Pakistan, Philippines, Qatar, Senegal,  Somalia, Sudan, Togo, and Venezuela.  And the resolution to create the list was sponsored by freedom-hating countries such as Syria, Iran, Venezuela, Pakistan, Libya, Yemen, and Cuba.

The UN’s anti-Israel bias, the anti-Semitic Boycott, Divestment, and Sanction of Israel movement, and the growing menace of anti-Semitism in the world are just a few of the reasons I decided to run on the Herut Slate for the World Zionist Congress (WZC).  The WZC is sometimes known as the “Parliament of the Jewish People.”

The delegates to the WZC select the leadership and influence the policies of some of the most essential Zionist organizations worldwide. They include the World Zionist Organization (WZO), the Jewish Agency for Israel (JAFI), Jewish National Fund-Keren Kayemet LeIsrael (JNF) and Keren Hayesod – which together allocate nearly $1 billion annually in funding in support of Israel and Jewish communities around the world.

What first impressed me about Herut was that when a rash of horrible anti-Semitic incidents struck the New York City area, they immediately created a Synagogue Security Kit, which they offered free to congregations across America.  Herut acted to fight hatred in America.

This WZC election is particularly crucial. Some fake “”Zionist”” organizations, including the anti-Israel J-Street, have banded together to create a slate that will seek to defund and penalize Israel for protecting its citizens and borders. Despite what they advertise, J Street is not a pro-Israel organization. One of the founders of J-Street claimed the creation of Israel was wrong. The organization supports the anti-Semitic BDS movement, opposed moving the US embassy to Jerusalem, and even fights against Israel being recognized as a Jewish state. Their college arm teaches our children to be anti-Israel

This is not a game!  So much is at stake!  A vote for Herut is a vote to protect Israel and American Jews against this anti-Jewish and anti-Semitic pseudo-Zionist organization.  Herut is fighting to keep Zionist funds working for true Zionist Ideals!!

If you are not eligible to vote and know someone who is both American and Jewish, PLEASE give them this link and ask them to vote. Help us protect the future of Israel, and anti-Semitism in the US and across the world. Voting ends on March 11th, so please act today and vote for Herut: Slate #10