Face it: America needs a good laugh right now. Tempers are running a little high. So be thankful for Alexandria Ocasio-Cortez. Not as a member of Congress, mind you — perish the thought! — but as a Shakespearean clown: someone to provide a bit of comic relief to ease the tension.

Ocasio-Cortez’s latest is intended to explode the “myth” that anyone in America who works hard can achieve success. The comedy arises out of the manner in which she goes about making her argument. Which is to say she attacks not the notion but a metaphor commonly used to express it. Watch:

.@AOC on America’s rags-to-riches ideal: “It’s a physical impossibility to lift yourself up by a bootstrap, by your shoelaces? It’s physically impossible. The whole thing is a joke.” pic.twitter.com/9WNf8UE06T

It should be noted for starters that bootstrap is not synonymous with “shoelace.” Rather, it is a loop still found on the back of some boots, which is used by the wearer to pull the footwear up around the ankles or calves.

But that’s the least of Ocasio-Cortez’s problems. The bigger issue is her taking a figure of speech literally. One supposes when someone tells her to look before she leaps, she replies that she has no plans to leap.

Perhaps the funniest part of her sermon on the need for a socialist nanny state is her own story, which belies her point. A number of commenters noted that on Twitter: 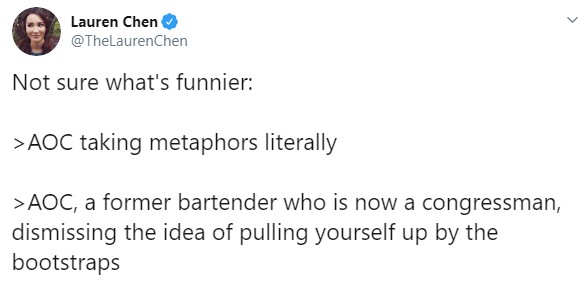 Open thread (2/7/20)
Next Post
Under new bill, Californians who register to vote would be required to cast ballots