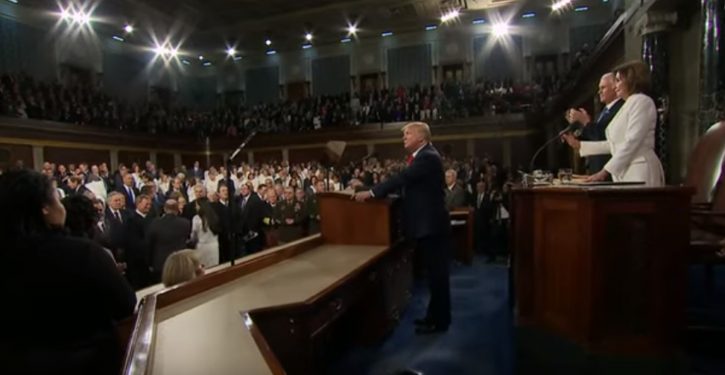 If Democrats were in any doubt about how President Trump would handle the State of the Union address while awaiting the Senate vote on his impeachment trial tomorrow, we can assume those doubts have been laid to rest.  (Video at the bottom.)

Trump didn’t face down the awkward situation.  He annihilated it.

It actually seems absurd to mention the impeachment proceeding, in light of Trump’s fearless cataloguing of the accomplishments of his administration and the American people in the past three years.  Whether speaking about unemployment, manufacturing, business start-ups, jobs, trade, wages and income, or getting people off welfare, he had good news to report, and at unprecedented levels.

There were many achievements to take note of: so many that very little of the speech was devoted to philosophy or political boilerplate.  The vast majority of it was either about specific achievements, or honoring people in the gallery – the president’s guests – who are representative of the finest in America, and of the administration’s priorities.

We could talk about Trump’s points on national security, China, Iran; restoring the military; border security; immigration; health care; school choice – we could go through the litany again.  But it’s more important to make a larger point.

Which is this.  What Trump was speaking about on Tuesday night was really the American people.  That’s why it resonated so strongly.

All the media heard was Trump “campaigning” by talking up what “he” had done.  But there wasn’t one blessed thing he spoke about that he could have accomplished on his own.  From jobs and employment to military victories to education opportunity and care for children, the remarkable, on-the-ground success of his three years in office has depended on the American people.

You can “provide” all the infrastructure of freedom, opportunity, and incentives you want.  But if the people don’t step up and knock it out of the park, you barely move the needle.

Trump trusted the people to do exactly they’ve done: knock it out of the park.  That’s what I don’t know if the Washington “establishment” will ever get.  Trump’s concept isn’t to control the people.  It’s to unleash the people.  And his structural reforms in taxation and regulation have shown what happens when you unleash the people.

Trump’s SOTU address was about the American people.  That’s why it was so powerful.  The moments that were spent honoring individuals were uniformly moving: a former homeless man who has become a top construction tradesman; a little girl getting an education scholarship; American military families; the noble legacy of a Tuskegee Airman; a Border Patrolman, perhaps some of the least-recognized yet hardest working of our uniformed protectors; a Christian aid worker whose story inspired the Special Forces that took down the leader of ISIS.

When Trump invited Venezuelan leader Juan Guaido to attend the SOTU, it was this America before which Guaido was recognized and honored.  I don’t think that move by Trump – an audacious one – will have been in vain.  The oppressions of rapacious socialism are the ash heap of history.  Nicolas Maduro cannot win out in Venezuela; he is the thief who comes only to steal, kill, and destroy.  Life belongs to the builders, the hopers, the creators, who leave more behind than they started with.

It was fitting that Trump presented Rush Limbaugh with the Presidential Medal of Freedom in the company of this America.  Trump did it just the way Limbaugh would want it: casually, on the fly, as if perhaps they paused on the way to the back nine for a short, low-key medal ceremony.  (I doubt there’s a conservative in America who wouldn’t be thrilled to receive his award from Melania Trump.)

“I will now ask, the @FLOTUS to present you with the honor, please”.

Few watching may have been thinking much about Trump’s cabinet and other senior officials during the speech.  But I pondered them, and I suspect many of them know that Trump appreciates their role in the accomplishments he spent an hour-plus highlighting,  They have suffered more than their share of slings and arrows, from the media and an organized “deep state” dedicated to harassing and defaming them.  They’ve had to endure much.  But one sometimes catches them looking like what they’re getting to do on a daily basis – the difference they’re getting to make – is an inordinate amount of fun.

Of the senators and congressmen and women at the SOTU, similar things could be said.  In some ways they’re under unceasing attack.  But they get real things – big things – done, and they have back-up from Trump.  (Some of the best back-up he has dispatched from the other end of the Mall was there over just the last few days: Trump’s legal team slicing and dicing the impeachment “case” with laconic precision and succinctness.)

This is what Trump’s SOTU address was about.  Getting government off of a bureaucratic top dead center that has been a parasite on the people for too long.  That top dead center isn’t the Constitution, and it’s a lie to say it is.  The top dead center the old-consensus establishment refuses to get off of isn’t “constitutionalism” or the rule of law or due process or the American spirit.  It has no claim to those honored principles.  It’s merely what Washington has gotten used to, in the service of a progressive agenda, over the last 100 years.

And that, my friends – as Rush Limbaugh would say – is what Nancy Pelosi ripped in pieces as Trump bid the nation goodnight with “God bless America!”

Here is the moment when Nancy Pelosi ripped up President @realDonaldTrump’s speech.

That was ripping up Janiyah’s dream of going to school.

That was ripping up the Hake family, who lost their dad because of terrorist Soleimani.

She wasn’t tearing up a speech.  She was tearing up the very miracle of America, which Trump’s presidency has got working among us, and by us, and through us once again.

My instinct is to ignore Pelosi's gesture – but @DrZuhdiJasser is right. It's the most succinct visual there could be to convey what Democrats will do if they regain the Oval Office.#SOTU2020 https://t.co/NS31BnC7gA

There is no more effective metaphor for what any of the 2020 Democratic candidates would do, if he or she were elected to the Oval Office in November.