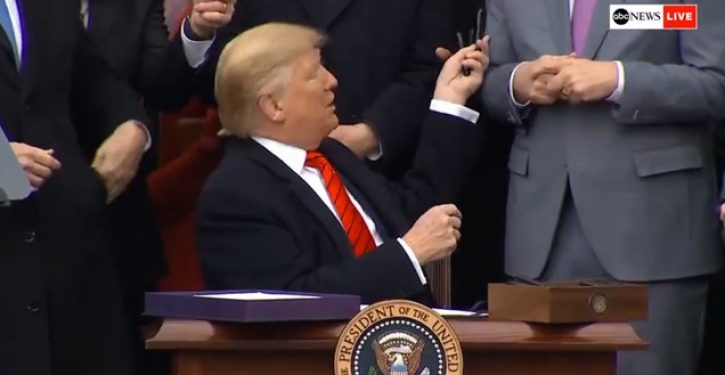 The United States-Mexico-Canada Agreement (USMCA) trade deal, to borrow a term from former Vice President Joe Biden, is a “big blanking deal.” (Biden of course used an obscenity in his version, but you get the general idea.)

Perhaps to show his gratitude to Democrats for branding him a cheater and a threat to national security, Pres. Donald Trump chose not to invite them to the ceremonial signing. He did, however, make a conciliatory gesture to House Speaker Nancy Pelosi by handing outs souvenir signing pens to those who were invited. Imitation, after all, is the highest form of flattery.

The USMCA represents a rare bipartisan achievement. The House passed it by an overwhelming 385-41 vote in December and the Senate followed with an 89-10 vote earlier this month https://t.co/091wFspE3c pic.twitter.com/kMxFCKX92C

Pelosi was none too happy about being snubbed and mocked in the same instant. “The White House hasn’t invited House Democrats to their USMCA signing ceremony,” a spokesman for her said in a statement, adding:

But we’ll be well represented in the huge changes to the original USMCA draft that Democrats wrested out of the Administration on labor, prescription drugs, environment and enforcement mechanism.

The “huge changes” referenced in the Speaker’s statement didn’t exactly come from the House resistance gang. Fox News host Laura Ingraham said she knows “a little bit about this deal” and to nobody’s surprise, the Democrats are lying.

“She [Pelosi] conceded on all major aspects of the deal except a few provisions, regarding drug companies that won’t get protections that they wanted,” Ingraham explained. “And look, we know the president himself has wanted to get tougher on the drug companies, anyway.”

It’s anybody’s guess as to why the president refused to invite Democrats to the ceremony, but there is no shortage of justifiable reasons.

Not the least of them is the reprehensible impeachment sham they’ve dragged the entire country through. The baseless investigations they’ve conducted over the last few years with little to no evidence of wrongdoing. The constant obstructionism.

Trump Learned From His Mistakes

The last time the president had a camera-loving, self-absorbed liberal at a signing ceremony for the USMCA, it was Canadian Prime Minister Justin Trudeau. As gratitude for Trump’s graciousness, Trudeau made a ridiculous scene, referring to the president as simply “Donald” during the meeting, repeatedly calling the USMCA, Trump’s preferred moniker, the “new NAFTA,” and refusing to hold up his signed copy of the agreement when Trump suggested doing a photo op.

“This is a model agreement that changes the trade landscape forever,” Trump bragged at the time of the signing with Canada and Mexico. “This is an agreement that first and foremost benefits working people, something of great importance to all three of us here today.”

A win for the American people and working-class citizens? No wonder Trump didn’t invite Democrats. They’ve been fighting against those groups of people since the dawn of time. 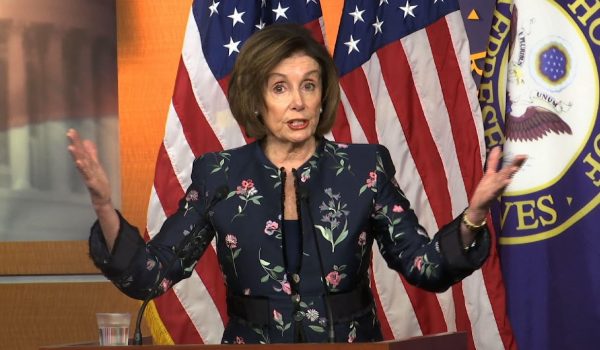 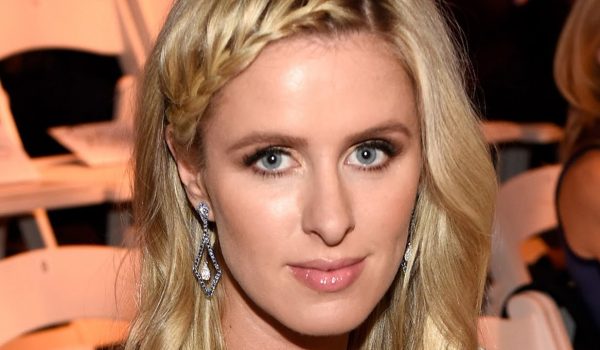