As NPR notes, “business groups maintain that Virginia will lose jobs — and its business-friendly reputation” — as a result. The Virginia chapter of the National Federation of Independent Business estimates that increasing the minimum wage to $15 would slash 130,000 jobs in Virginia over 10 years.

In 2016, California’s legislative analyst estimated that the gradual increase in California’s minimum wage to $15 an hour would cost taxpayers $3.6 billion more a year in government pay alone.

A $15 minimum wage also increases the cost of the products that everyone purchases. As economist James Sherk notes, “Economists find that businesses pass minimum-wage costs on to their customers by raising prices.” As the Associated Press reported in 2018, “Prices rise as the minimum wage increases.”

As Steve Bakke notes in The Courier, “A large increase like this would be inflationary, with most of the costs passed on to consumers. Consumer price increases would eventually wipe out much of the purchasing power gains intended for low income workers.”

The government also buys products and services, through government contracts, and it,  like ordinary consumers, would end up paying higher prices due to a minimum wage increase.

While businesses would pass on much of the cost of a minimum wage increase to consumers and purchasers, some businesses — such as those that compete with businesses in states with lower minimum wages — would not be able to pass along the full cost of an increase. For example, a retailer near the North Carolina border might simply go bankrupt and lay off its workers. That’s because North Carolina’s minimum wage is only $7.25, much less than what Virginia’s minimum wage will be. North Carolina’s lower wages would enable retailers right over the border to charge a lower price than the Virginia retailer, which could not afford to cut its prices to compete. Retailer profit margins are typically only a few percent — for example, grocery stores have a typical profit margin of only 1-3%.

(While virtually all employers in northern Virginia already pay their  workers well over the $7.25 minimum wage, there are areas of Virginia near North Carolina that are so cheap to live in that the median hourly wage is around, or even below, $15 per hour. For example, the Roanoke region has a median hourly wage of $16.76. In these areas, even experienced workers often make less than $15 per hour, including middle-class homeowners — most residents of the counties in Virginia that have median wages below $15 own their own home).

While employers or consumers would pay the full cost of a minimum wage increase, workers would not reap the full benefit. Some would lose their jobs. Others would keep their jobs at an increased hourly wage, but receive less added income than the income their employer (and its customers) effectively lose through lost business profit and higher consumer prices (which reduces consumers disposable income).

That’s because the federal government provides help for the lowest paid workers, help that phases out as their income rises. Those benefits are means-tested. So a state that raises its minimum wage is effectively giving money back to Uncle Sam. Raising a state minimum wage is like giving away free money, or economic unilateral disarmament.

Federal benefits like earned income tax credits get phased out as a minimum wage increase raises the pay of a low-wage worker. As Henry Schmid noted in the Wall Street Journal, “the tax implications of going from a $10- to a $15-an-hour minimum wage” are fiscally “very significant. For a family of four with both spouses making the minimum wage, their federal tax will increase from $4,106 to $7,219, payroll tax will increase from $2,579 to $3,869, their earned-income tax credit (EITC) will be reduced from $596 to zero … and the $2,400 food-stamp credit will be lost. Of the $20,800 increase in income in going from $10 to $15 an hour, $7,778 will be diverted to the government, which doesn’t include loss of other income-dependent government welfare programs and added costs due to the resulting inflation. Over one third of the wage increase will flow to the [federal] government.”

So by raising its minimum wage, Virginia is giving lots of money back to the federal government. It also is increasing costs to state taxpayers, both by driving up the cost of state government contracts, and by increasing the state tax burden.

By wiping out jobs, a large minimum wage increases increases unemployment, and reduces the number of state residents who are employed and paying income taxes. That means that taxes need to rise on state taxpayers who still have a job. They need to pay the costs of state government, such as education and law enforcement, which don’t fall just because some residents have lost their  jobs.

Such job losses are likely to be substantial. An economic study estimated that Maryland, which is richer and better able to handle a minimum wage increase than Virginia, will lose 99,000 jobs as its minimum wage gradually increases to $15 over six years. Virginia has more people and more low-wage jobs, so its job losses from a $15 minimum wage could be greater. 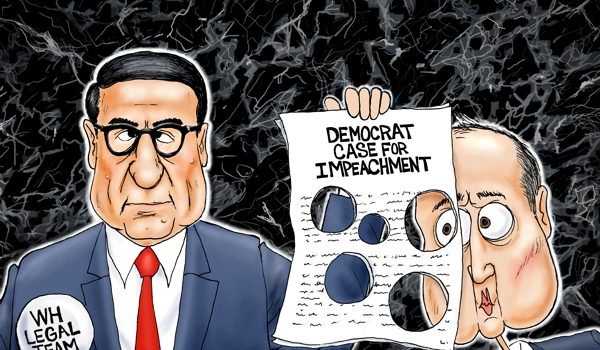 Cartoon of the Day: Holy impeachment
Next Post
The defense team concludes its arguments, ending on a high (read: slightly amusing) note