The 9th Circuit Court of Appeals in California ruled Friday that children do not have standing to sue the Trump administration and the federal government for not adequately addressing climate change.

Climate policy comes under the purview of Congress and the president, not the court system, the U.S. Court of Appeals decided in a split decision. Attorneys for the teenagers can ask the U.S. Supreme Court to allow the trial to continue in Oregon, where it was initially filed.

“The panel reluctantly concluded that the plaintiffs’ case must be made to the political branches or to the electorate at large,” the panel of judges noted. (RELATED: Here’s What The ’60 Minutes’ Report On The Kids’ Climate Crusade Missed)

“The political branches might conclude — however inappropriately in the plaintiffs’ view — that economic or defense considerations called for continuation of the very programs challenged in this suit,” the court noted, citing the government’s concerns that unforeseen factors complicate such policies.

The 21 young people involved in Juliana v. United States sought a court order requiring the government to implement an “enforceable national remedial plan” phasing out carbon emissions in an effort to stabilize the climate. The case has survived several attempts by the government to torpedo the case after it was originally filed in 2015.

The U.S. Supreme Court in November 2018 decided not to block the lawsuit — the move came less than two weeks after Chief Justice John Roberts granted the government a stay in October 2018.  The court’s order said the government should seek relief before the 9th Circuit.

Plaintiffs in the case asked the court to issue an injunction to prevent the government from issuing oil extraction licenses before March, when the Trump administration plans to offer nearly 80 million acres of unleased areas off the Gulf of Mexico.

President Donald Trump has made headway in recent months changing the makeup of the 9th Circuit Court. He nominated Patrick Bumatay and Lawrence VanDyke to the court in September. They would raise the number of Trump’s 9th Circuit appointees to nine. 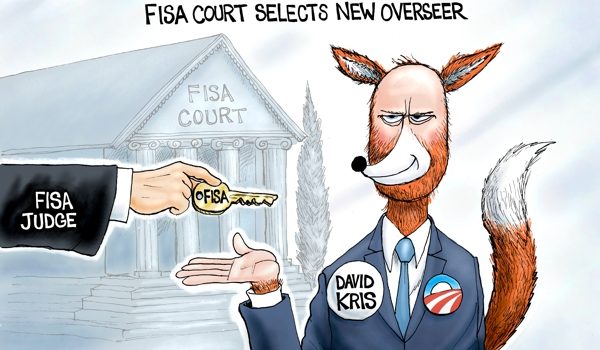 Cartoon of the Day: FISA fox
Next Post
Elizabeth Warren takes credit for sponsoring bills she voted against