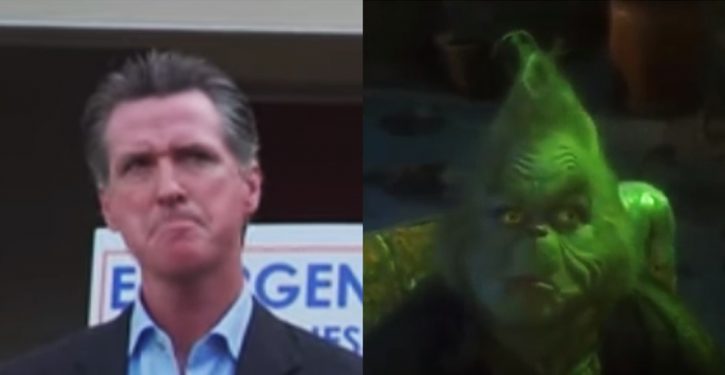 Before Christmas, President Trump’s thoughts were on the problem of homelessness and public sanitation in California.  Many news outlets have been reporting on a tweet by Trump from last Friday in which he took California Governor Gavin Newsom to task for doing “a really bad job” in that regard:

Governor Gavin N has done a really bad job on taking care of the homeless population in California. If he can’t fix the problem, the Federal Govt. will get involved! https://t.co/2z8zM37PUA

As Fox News observes, “The Golden State has led the nation in the number of homeless people with an estimated total of over 129,972 in January 2018, according to a Department of Housing and Urban Development [HUD] report.”

According to an article this week in the San Francisco Chronicle, cited by Matt Vespa at Townhall, San Francisco has spent $94 million in 2019 cleaning up the city streets that the homeless are using as dwelling places and outdoor toilets.  The Chronicle points out that that breaks down to more than $250,000 a day:

Between street sweeping crews, staffed portable toilets and sidewalk steamers, San Francisco spent $94 million — or about $257,534 a day this year — trying to keep the city clean

Yet it’s still, in the Chronicle’s words, “a losing battle.”  The paper’s story alludes to a now-viral video of a man (reportedly a drug addict) who was caught defecating in the aisle of a grocery store.

“Here’s a pic of a man on drugs taking a poo in aisle 10 of the (Marina) Safeway, Sunday morning in #SF. Why is this okay?” tweeted Deborah Kan.

He “had plenty of time to find the toilet paper aisle, but not the actual bathroom,” Matt Estrada added in a second tweet.

On Thursday, Trump took the opportunity again to highlight the problems of “homelessness & crime” in California – this time calling out Nancy Pelosi’s district.

Nancy Pelosi’s District in California has rapidly become one of the worst anywhere in the U.S. when it come to the homeless & crime. It has gotten so bad, so fast – she has lost total control and, along with her equally incompetent governor, Gavin Newsom, it is a very sad sight!

Governor Newsom, never one to shy away from a fight, jumped into the fray with our Tweet of the Day.

I imagine Trump’s Christmas to be like that scene when the Grinch yells “I’m an idiot!” and his echo yells back “you’re an idiot!!” https://t.co/zntn5LcrFD

Some readers may not see this as a powerful-man response.  The important question, however, may be a cultural one.  Was it an error undermining the wit of Governor Newsom’s tweet to go with lines from the Jim Carrey live action version of the Grinch movie (2000, directed by Ron Howard), instead of the classic animated version from 1966, with the Grinch voiced by Boris Karloff?

UK: School wants words about Jesus in Christmas carol changed so ‘all can join in’
Next Post
John McCain provided FBI with Steele memos after FBI dropped Steele as source