Running a presidential campaign in the internet age is not easy. How uneasy is it? Just ask presidential hopeful Elizabeth Warren. The Democratic senator from Massachusetts committed four fax pas of varying magnitude within the space of a single week, which may be a record. Where did the senator go wrong? Let us count the ways.

Quick, Robin — to the wine cave

At last week’s Democratic debate Warren tore into fellow wannabe Pete Buttigieg over having taken part in a fundraiser held inside a wine cave in Napa Valley, Calif. last weekend. “Billionaires in wine caves should not pick the next president of the United States,” she chided the South Bend, Ind. mayor.

But as Brie Stimson of Fox News reports Warren herself held a fundraiser at a winery in 2018, less than two years before she called out Mayor Pete for the same crime. “Singer Melissa Etheridge performed at the event, which offered VIP experiences to $2,700 donors and souvenir wine bottles for $1,000 donors.”

In keeping with a central theme of her campaign — wealth inequality — Warren’s campaign website up until recently featured a graphic breaking down the 400 wealthiest Americans by race. As the Daily Caller News Foundation’s Peter Hasson reveals, the since-deleted graphic “classified at least 14 American billionaires of Asian, Indian, and Middle-Eastern descent as ‘white,'” ostensibly to reinforce the view that being very rich is a disease that goes hand in hand with the disease of having white skin.

Pirating a page out of the Hillary campaign playbook

At last Thursday’s debate, Warren was asked to respond to the fact that if elected she “would be the oldest president ever inaugurated.” Her comeback — “I’d also be the youngest woman ever inaugurated” — was golden and earned her a round of applause. Watch:

I’d be the youngest woman ever inaugurated. #DemDebate pic.twitter.com/7Wsn5fAkRo

The only problem with the line, as the Washington Free Beacon’s Andrew Stiles notes, is that the line is not original, despite the lack of acknowledgment of the source. So who said it first?

Hillary Clinton used it all the way back in June 2015 during a speech at her official campaign launch on Roosevelt Island in New York City. “I will be the youngest woman president in the history of the United States,” the twice-failed candidate said. “You won’t see my hair turn white in the White House. I’ve been coloring my hair for years.”

This may not have been the endorsement Elizabeth Warren was looking for.

Ahead of Thursday night’s sixth Democratic presidential debate, the Massachusetts senator’s presidential campaign trumpeted a list of endorsements from figures associated with President Obama’s campaign and administration — including … Ed Buck.

“I’m grateful to have the support of these Obama campaign alumni and my fellow Obama administration alumni,” tweeted Warren on Wednesday, linking to a CNN article about more than 200 Obama-linked figures signing on to back the Massachusetts senator in 2020.

So who is Ed Buck? He is a “disgraced Democratic mega-donor charged with forcing lethal doses of drugs on multiple lovers at this West Hollywood home.”

Warren’s campaign said in a statement that the list was compiled by former figures in the Obama camp, and that Buck never should have been included because, while he donated to Obama, he was neither a staffer nor an alum of the campaign.

Legal pitfalls in reparations
Next Post
Cartoon of the Day: Hurry up and wait 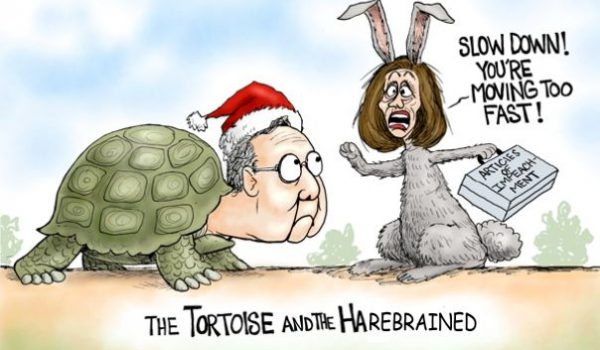