I don’t know if Adam Schiff believes in fortune telling, but you don’t need a crystal to predict this guy’s future after the boorish, partially televised display he put on for the American people in recent weeks.

On Saturday, Schiff appeared at a town hall meeting in Glendale, Calif. “The event,” the Los Angeles Times reports, “was meant for an Armenian organization to thank U.S. government officials for their support of resolutions recognizing the Armenian genocide. Schiff is a co-sponsor of a resolution.” But the meeting took on a different character when  the California congressman began to speak. Via the Times:

As Schiff began speaking, a man and two women held up signs reading,”Don’t Impeach.” When they were asked to take down the signs, they refused.

Then, about a dozen people scattered throughout the auditorium began yelling, “Liar!”

From there, total chaos ensued, as you can see in the video that follows. Schiff, seemingly oblivious to the skirmishes that were breaking out among his constituents, can be heard over the din continuing with his prepared remarks.

Schiff of course represents one of the deepest-blue states in the Union, so the likelihood he will not be re-elected is infinitesimal. Others in his party from less secure precincts may not fair as well when the next election rolls around. Although Schiff will most likely retain his job, he may lose the chairmanship of the House Intelligence Committee. Wouldn’t that be a shame? 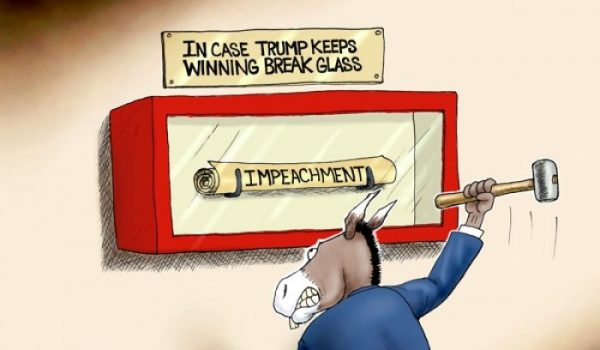 Cartoon of the Day: Alarming
Next Post
After Crossfire Hurricane: A roadmap for wirebrushing the perpetrators’ methods and motives