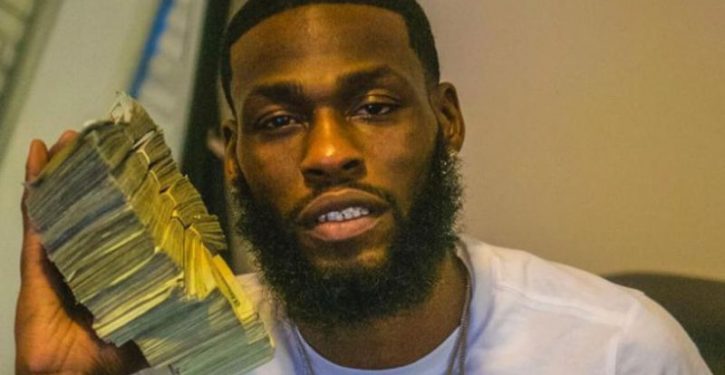 This is the latest installment of LU’s “World’s Dumbest Thief” series. The crime in this edition bears some similarities to a credit card heist reported in 2014 in which the thief, 26-year-old Mashana Harris, posed for a photo in which she plainly displays the filched plastic.

The star of this latest episode is 29-year-old Arlando Henderson, who, according to New York’s Daily News, “was arrested by the FBI on Dec. 4 and charged with financial institution fraud and related charges — based off Henderson’s greenback-laden Instagram post.”

Henderson, a former bank employee from Charlotte, N.C., was arrested for allegedly stealing more than $88,000 in cash from the bank where he was employed, according to a statement released Friday by the United States Attorney’s Office Western District of North Carolina.

According to the allegations contained in the indictment, which was unsealed earlier this week in federal court, the 29-year-old man had access to the vault at the unnamed financial institution where he worked.

On at least 18 occasions in 2019 he stole cash from deposits made by the bank’s customers from the vault, and then deposited some of it in a nearby ATM.

Henderson didn’t limit his self-congratulatory posts to Instagram. He also posted selfies on Facebook, including one of himself standing in front of his new car.

“’I make it look easy but this s–t really a PROCESS,’ he egotistically posted on Facebook on Aug, 4.”

Suit alleges Detroit has thousands of dead residents on voting rolls
Next Post
Comey says he was ‘wrong’ about FBI’s surveillance abuse, but downplays own role in bungled case