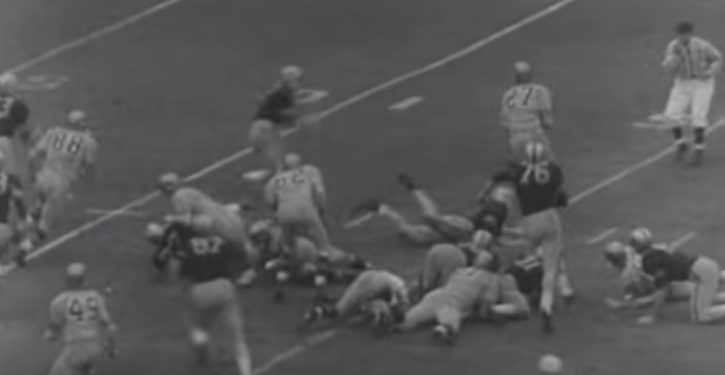 In Memoriam: Navy halfback #27 Joe Bellino takes off down the field in the Army-Navy game on 30 Nov 1959, which Navy won 43-12. Bellino was awarded the Heisman Trophy in 1960, and after his active duty Navy service (1961-65) played for the Boston Patriots 1965-67. He spent many years as a businessman, active in charitable work, in Bedford, Massachusetts, and passed away in March of 2019. R.I.P., shipmate. British Pathe video, YouTube

Nothing gets between us and the Army-Navy game.  Well, except the news that Oklahoma will be playing LSU in the Chick-fil-A Peach Bowl for a shot at the championship match on 13 January.

We hear the participation trophy for the Sooners is already being cast.

OK, OK, we’ll have a better attitude as we get closer to the 28th.  Meanwhile, we’ve got the match of matches to get through, and a few other bowl season notices to issue for our Inner Circle.

Essay question for the week: who’s your pick for the Heisman?  No fair waiting until after the ceremony.

We expect a lot of running.

It’s kind of hard to put more curlicues on that.  As long as Navy QB Malcolm Perry’s legs hold out, we’re going with the oddsnod to the Midshipmen of 6.5.

We note that Navy’s defense has been very effective against the run this year, ranking in the top 25 in most categories.  It’s substantially less effective against the throwing game; but then, see the opening point above.  Army doesn’t really have a passing game (and injury-prone starting QB Kelvin Hopkins is still reportedly questionable for Saturday).

Not that Navy’s is much to write home about.  It’s better for ALCON (“all concerned”) if Perry doesn’t try to throw much, as he gets intercepted pretty regularly.

Army had the advantage of a really good O-line last year, but has had to deal with a lot of injuries this year, and has had less success punching the run.  Against Navy’s very good D, the probabilities aren’t looking favorable.

Both teams, as usual, are mostly in the “Excellent” column when it comes to being penalty-free, although Army’s defense has some cleaning up to do.

Raining-ish and in the 50s for the 3 PM kickoff in Philly.

The unis are in for this year:

Navy’s backstory video is a fun walk down Memory Lane:

A couple of spirit spots from each side to get you in the mood.

Just a preview of coming attractions.  The bowls in all their glory will be properly sliced, diced, and slavered over as the weeks advance upon us.

Virginia Tech plays Kentucky in the Belk Bowl on 31 December.

Div II’s hot-running Slippery Rock hosts Minnesota State on Saturday in the semi-finals.  Ferris State (which ended up as the #1 seed) will meet West Florida in the other game.  In Slippery Rock, PA, we figure the game-time conditions – mid-30s, winter mix precip (snow, sleet) – shouldn’t favor either team.  They’re both used to it.  Kickoff is at 12:30 PM Eastern; coverage on ESPN3. 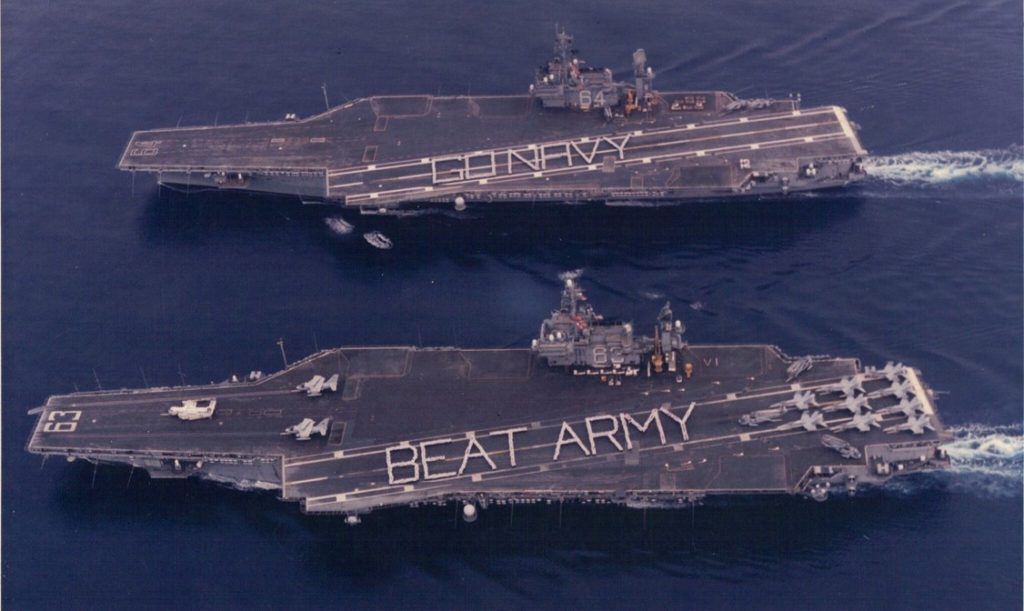 Quietly, Democrats cave on border wall funding
Next Post
Trump to Democrats: Impeach me at your own risk