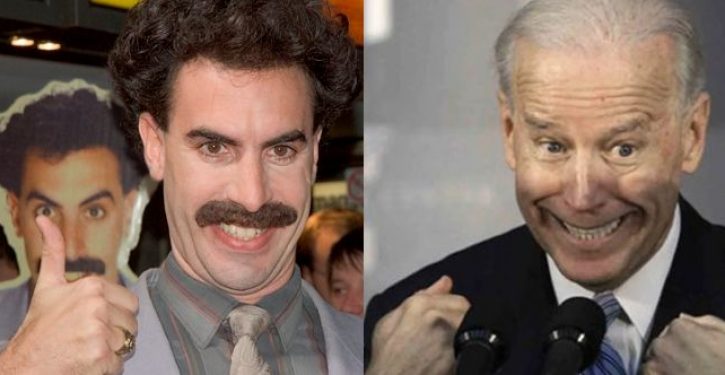 Political junkies who watched Joe Biden lose his composure at an Iowa town hall on Thursday, calling an 83-year-old prospective voter a “damn liar” and challenging him to a push-up contest, are in general agreement that the former vice president came off badly in the exchange.

Even David Axelrod, former confidant to Barack Obama and current CNN political commentator David Axelrod, said that Biden “went off the rails” when confronted with an accusation about his role in the Burisma kerfuffle.

It is a certainty that questions will come up again, increasingly and from reporters if Biden wins the Democratic nomination. It behooves him, therefore, to work on a better response than the one he had on Thursday, which also included fat-shaming the man. In the video that follows at around 2:31, Biden says, “Look, fat.”

Biden has since insisted that he said “facts,” which makes utterly no sense in context. “Look, facts”?Shades of “boo-urns.”

What struck me most about the mention of the man’s weight was the form it took. Biden didn’t say, “You’re fat” or “Look, fatso” or “Look, fatty.” He said “Look, fat,” using the word as an insulting form of address. It makes me wonder whether the fictional character Borat is now one of Biden’s campaign advisers.