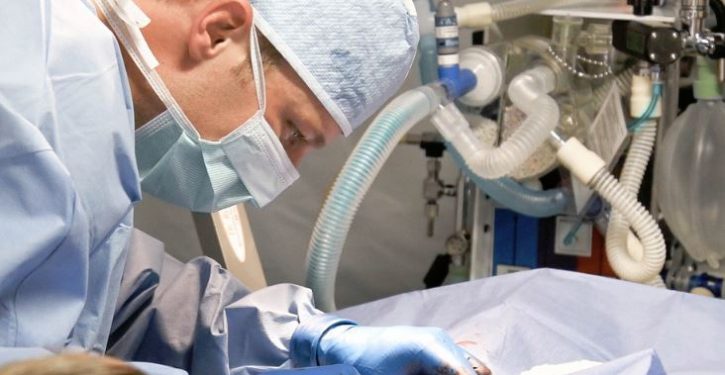 Being “gender-affirming” shouldn’t be an excuse for a doctor to commit medical malpractice. But that may be happening in many cases. The National Review describes a possible example. Doctors affirmed a man’s false belief that he had a female gender identity, and then mutilated his body by giving him a sex change he came to regret.

Plagued by self-hatred about his speech and mannerisms, he “heard about transgenderism” in college, and “seized on it as the solution.” A gender-affirming free clinic “immediately affirmed” his female gender identity. He was then given “a rather incomplete informed consent document to sign.” Later, his doctor told him that he “should really get surgery.” He was given an orchiectomy, after being told it would help him. But he says he wasn’t even told that orchiectomy was castration. After being castrated, he “developed a drug habit” and began “ejaculating blood.” He said that “the gender clinic kept telling me, ‘Oh, it gets better.’” But it didn’t.

He says he was never given an independent psychological evaluation, either before beginning hormone-replacement therapy or before surgery. After surgery, a different therapist found him to be on the autistic spectrum. But by then, he had already been castrated.

Getting a sex change seems to have caused real havoc in the lives of thousands of people.

The National Review story describes one of those many people:

At age 44, Debbie transitioned medically, taking testosterone, which gave her a beard and made her go bald. She then transitioned surgically, having flesh from her arm grafted to construct a pseudo-penis. Debbie told the BBC that she got the idea about being transgender after watching TV coverage of trans people. … She hoped that changing gender would help her “become a different person” as well as “accepted in the world.” However, after 17 years on testosterone and changing her name to Lee, and after having had “multiple procedures,” she realized she had made a mistake:

‘I remember breaking down. It was like this was a mistake. It should never have happened. But what the hell do you do about it? How do you go through yet another harrowing transition? What do you do? I’ve got no hair. I’ve got a beard. I’ve had all my body mutilated. How the hell do I go back to being the Debbie that I was?’

Will there will be a wave of malpractice lawsuits against clinics that profit from sex changes? Fred Arnolfson thinks so:

The liability in a few years for these for-profit “chop shops” is going to be unbelievable. Thousands of cases of castrated men, some of whom have early onset osteoporosis, mental impairment, ostomies, etc. They’ll claim they weren’t really transgender and it will rain money.

Those who put children through gender transitions will face harsh questioning, he says:

The transitioning of youth will end up being remembered like frontal lobotomies. This is a treatment that isn’t proven to work with adults, has huge costs, is irreversible, has health consequences, and is done to children despite the fact that 80% of kids desist automatically.

Jamie Shupe gives one example in “I was America’s first ‘nonbinary person.’ It was all a sham.” Jamie Shupe is, in fact, male, as he notes in the Daily Signal. But he wanted in vain to be a woman, due to a condition known as “autogynephilia.” When his therapist expressed skepticism about whether he would actually benefit from trying to change his sex, he filed a “formal complaint” against her and found a new therapist, who readily affirmed his new “identity as a woman.” But eventually he changed his mind and decided he was nonbinary, not female:

When the fantasy of being a woman came to an end, I asked two of my doctors to allow me to become nonbinary instead of female to bail me out. Both readily agreed. … To escape the delusion of having become a woman, I did something completely unprecedented in American history. In 2016, I convinced an Oregon judge to declare my sex to be nonbinary—neither male nor female.

the judge didn’t ask me a single question. Nor did this officer of the court demand to see any medical evidence alleging that I was born something magical. Within minutes, the judge just signed off on the court order.

A sensible magistrate would have politely told me no and refused to sign such an outlandish legal request. ‘Gender is just a concept. Biological sex defines all of us,’ that person would have said. .… In January 2019, unable to advance the fraud for another single day, I reclaimed my male birth sex.

Kamala Harris calls it quits on 2020 quest for White House
Next Post
Greta Thunberg warns: ‘People are underestimating the force of angry kids’