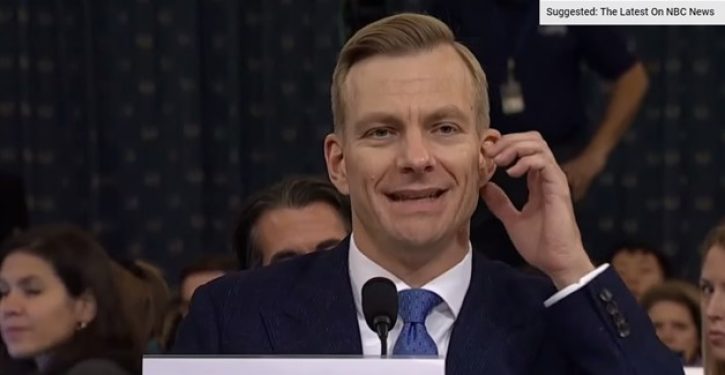 Can you hear him now? Him in this case is “investigative journalist” Chris Cuomo (aka Fredo), who decided to make a simple test on air to prove an assertion made by diplomat David Holmes during this morning’s impeachment inquiry hearings. Holmes told Daniel Goldman, lead council for the Democrats, that he managed to overhear a cell phone conversation between Donald Trump and Ambassador to the EU Gordon Sondland during a lunch he and Sondland attended in late July even though the speaker on Sondland’s phone was not on.

To foster the illusion of fairness, Goldman, who despises Trump (of whom he once said, “Mob bosses are far smarter and way more savvy and discrete”), questioned the logistics of Holmes being able to hear a cell phone conversation with the speaker disengaged. Holmes replied that Trump had spoken loudly, holding his cupped hand up to his ear as if to demonstrate what being on the phone looks like.

As if to lend plausibility to Holmes’s story, Cuomo attempted to mimic the same conditions on live TV. With the speaker on his phone turned off, Cuomo made a call to his mother and attempted to have her converse with panelists on his show. The results of the experiment follow.

If you can’t hear sh*t, you must acquit https://t.co/NN2mTHhEhz

Can this charade get any more ridiculous?

Biden to Democrats: Stop chanting ‘Lock him up’ about Trump
Next Post
Just one problem with Team Biden’s post-debate email: It went out hours before debate began