Presidential hopeful Pete Buttigieg is holding his own in the polls, which show him with a slight lead over Elizabeth Warren in Iowa. But one thing that has been sorely missing from Mayor Pete’s bid is the support of black voters.

Partly this is history — one of his first acts upon entering office as South Bend’s mayor in 2012 was to fire the city’s first black police chief — and partly its Buttigieg’s sexual orientation. According to a poll by the Public Religion Research Institute, fewer than half (48%) of black Americans support allowing gay and lesbian couples to marry, while 41% are opposed.

With black unemployment at record lows under the Trump administration, Mayor Pete’s plan was always going to be a tough sell. So shortly after the plan was released, the campaign, according to The Intercept, “began promoting a list of 400 South Carolinian supporters of his Douglass Plan in emails to reporters and posts on social media.”

Buttigieg traveled to South Carolina to spread awareness of the plan. The supporters were rolled out in a press release and open letter published in the HBCU Times — which focuses on “positive news related to Historically Black Colleges and Universities.” Listed at the top of the press release were three prominent supporters, Columbia City Councilwoman Tameika Devine; Rehoboth Baptist pastor and state Rep. Ivory Thigpen; and Johnnie Cordero, chair of the state party’s Black Caucus.

Just one problem: None of those individuals had endorsed Buttigieg, and all had issues with the language of the press release. Tameika Devine is quoted as saying:

Clearly from the number of calls I received about my endorsement, I think the way they put it out there wasn’t clear, that it was an endorsement of the plan, and that may have been intentionally vague. I’m political, I know how that works. I do think they probably put it out there thinking people wouldn’t read the fine print or wouldn’t look at the details or even contact the people and say, ‘Hey, you’re endorsing Mayor Pete?’

But that wasn’t the only false advertising the campaign engaged in. As the Washington Post reports, a “photo of a black woman smiling at a young black boy had been splashed for weeks across a web page detailing South Bend, Ind., Mayor Pete Buttigieg’s plan. …”

But when the woman in the photo learned her likeness was displayed on the Democratic presidential candidate’s campaign website, she was confused. … The woman isn’t African American and she’s never heard of the Douglass Plan — she is from Kenya, where the picture was originally taken.

“[W]hat’s the meaning of the message accompanied by the photo?” the woman asked. … “Have no idea of what’s happening…”

On top of everything else, the Buttigieg campaign used a stock photo from Kenya to promote its Frederick Douglass Plan for Black America https://t.co/OqnGSIqCLS pic.twitter.com/qBqei71TdA

At a time when Democrats are attempting to persuade Americans that Donald Trump is so deceitful he needs to be removed from Congress by congressional fiat, rather than the will of the people, this bit of clumsy sleight-of-hand could end up hurting Buttigieg more than he knows. 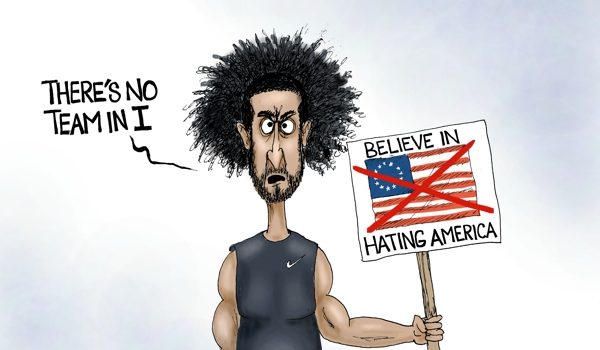