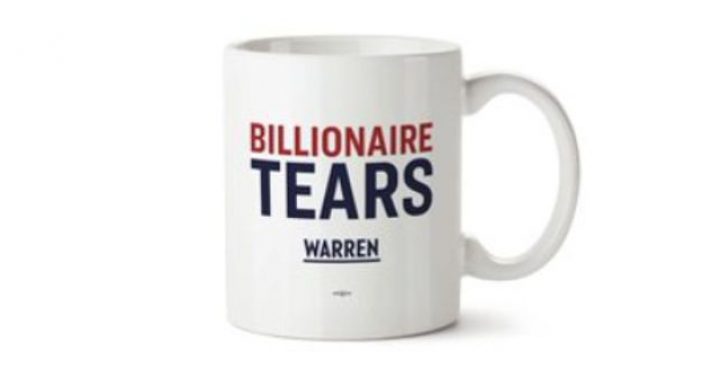 The $25 mug, which Warren’s presidential campaign introduced Wednesday, is sold through Shopify, a Canadian e-commerce company whose founder and CEO, Tobias Lütke, is worth an estimated $2.8 billion.

“Savor a warm, slightly salty beverage of your choice in this union-made mug as you contemplate all the good a wealth tax could do: universal healthcare, student debt cancellation, universal free college, and more,” the mug’s product page states.

Warren’s presidential campaign began utilizing Shopify’s services shortly after the Massachusetts senator declared her candidacy in February. Her campaign has disbursed nearly $105,000 to Shopify for credit card processing fees so far in 2019, according to Federal Election Commission (FEC) records.

The Warren campaign did not return a request for comment.

But opponents of Warren’s proposed wealth tax say it’s fundamentally flawed. Of the 12 European countries that had a wealth tax in place in 1990, nine had rescinded the measure by 2019. (RELATED: ‘Everyone Is Nervous’: Wall Street Fears A Warren Presidency)

The Organisation for Economic Cooperation and Development found that the wealth tax was too expensive to administer, drastically altered investment decisions and drove wealthy citizens out of their homelands, NPR reported.

France’s wealth tax, initiated in 2000, led to an exodus of some 42,000 millionaires from the country in 12 years, according to NPR. French President Emmanuel Macron rescinded the measure in 2018.

Bernie Sanders says he will consider Ocasio-Cortez for a cabinet position
Next Post
According to Nancy Pelosi, the burden of proof rests with Trump