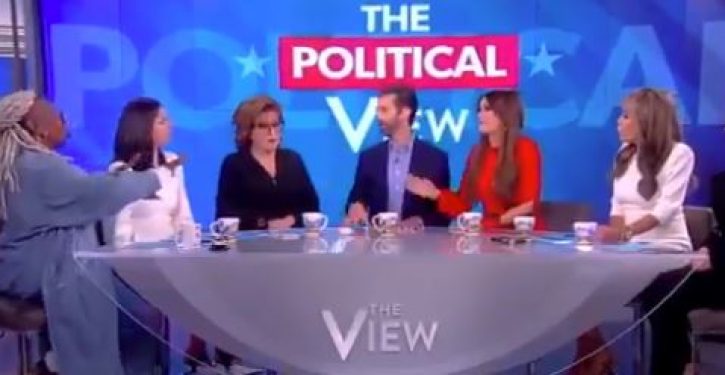 Before getting to the meat of the post, a question: Whoopi Goldberg, who was born Caryn Johnson, has been using her adopted “Jewish” stage name for decades. Why has no one on the Left called her out for cultural appropriation?

On Wednesday, former Fox News Channel host Kimberly Guilfoyle was a guest on “The View” where she enlarged on, among other things, on the fact that the Left began its impeachment narrative the day after the 2016 election. Calling the impeachment obsession “a concerted effort by a lot of people disappointed by the results of the election to undo it,” Guilfoyle claimed that Goldberg herself was guilty of invoking impeachment on Day 2.

Goldberg cut in to challenge the claim, at which point the show’s producers queued up a video of her on Nov. 9, 2016 uttering the words, “We can kick his ass out … There is such a thing called impeachment.”

Whoopi today: We did not bring up impeachment on the day after the election!

Whoopi on November 9, 2016: “We can kick his ass out … There is such a thing called impeachment.”