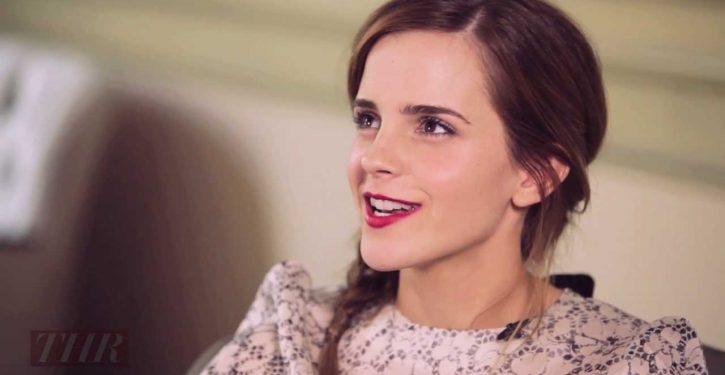 There’s never a dull, un-politically correct moment when you’re a liberal. That’s because liberals fancy themselves to be society’s “thinkers,” always in search of new, cumbersome ways to express old — and usually offensive — ideas. Juvenile delinquent? Heavens, no! Instead, say “justice-involved youth.” Otherwise you risk hurting the feelings of kids whose hobbies include vandalism and smash-and-grab theft.

Other nifty euphemisms the Left has bestowed on us include man-caused disaster (“act of terrorism” to all you cretins) and undocumented worker for “illegal alien.”

And now we have a new switcheroo to add to the list. It comes to us courtesy of “Harry Potter” alumna Emma Watson, who told Vogue UK that she’s happy being unattached but prefers calling herself “self-partnered” instead of “single.”

The neologism came up in a portion of the interview in which the actress is asked about turning 30, a milestone she will reach in April:

Why does everyone make such a big fuss about turning 30? This is not a big deal. Cut to 29, and I’m like, ‘Oh my God, I feel so stressed and anxious. And I realise it’s because there is suddenly this bloody influx of subliminal messaging around. If you have not built a home, if you do not have a husband, if you do not have a baby, and you are turning 30, and you’re not in some incredibly secure, stable place in your career, or you’re still figuring things out. … There’s just this incredible amount of anxiety.

So is she happy? Here’s her answer:

I never believed the whole ‘I’m happy single’ spiel. I was like, ‘This is totally spiel.’ It took me a long time, but I’m very happy [being single]. I call it being self-partnered.

Maybe Watson should be made aware of another leftist invention, in case she hasn’t already heard about. It’s known as sologamy, or “self-marriage.” It sounds like the perfect next step for the self-partnered among us.

Ilhan Omar endorses Bernie because, like her, he advocates an end to ‘western imperialism’
Next Post
Project Veritas scoop: Allegation that ABC News spiked Jeffrey Epstein story three years ago