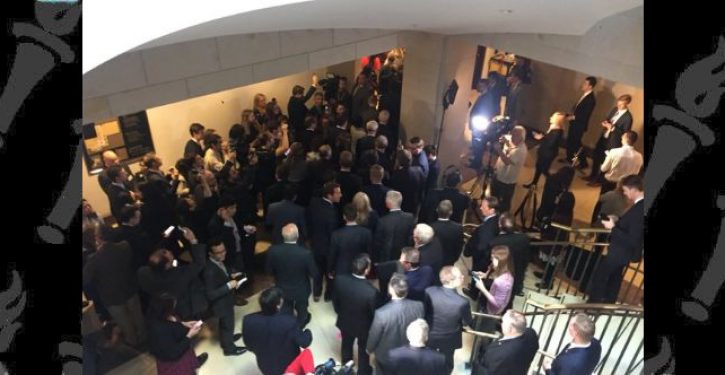 The crusade against people of pallor is nothing new. For years now, we’ve been witnessing the rise of anti-white sentiment on the Left, a group that ironically professes to champion “inclusion” and “diversity.” In September, Williams College, a prestigious liberal arts college, held a symposium celebrating “New Voices in Science and Technology.” In case the title was too subtle for ignorant white academics to grasp, the organizers made it clear that only “historically underrepresented groups” were welcome. Maybe if whites were confused about the message, it’s because progressives never come out and say in plain language what they mean.

That was until Wednesday. Remember the date: Oct. 23, 2019 . It’s the day the phrase white man (and variants thereof) became a dirty word among speakers of English. What occasioned the linguistic upheaval was the storming of the closed-door House “impeachment” inquiry by several dozen Republican congressmen who felt strongly that the president’s due process rights were being violated.

CNN’s Keith Boykin took it a step further, claiming the scene was reminiscent of the Ku Klux Klan “assembled outside of a jail … so they can deliver their own justice.” When host Jake Tapper reined Boykin in, telling him “the Klan metaphor was a little strong,” Boykin responded:

It’s a visual problem to have this group of almost all white men going in — in defense of the white man who already is, I think, by most accounts a racist. [Emphasis added]

The assault was not limited to the media. Rep. Jackie Speier (D-Calif.) mocked her follow House members as “a bunch of angry white men conducting a stunt.” But her comment did not go unaddressed. Rep. Matt Gaetz (R-Fla.), one of the leaders of the group that stormed the proceedings, was interviewed on MSNBC, where he asked rhetorically, “Did she say we were a bunch of white men? What does the fact that we are white men have to do with our desire to represent the millions of constituents we serve?” What indeed!

It’s worth noting, by the way, that all the hurlers of insults mentioned in this story are white, and two of them are white men. Hmm.