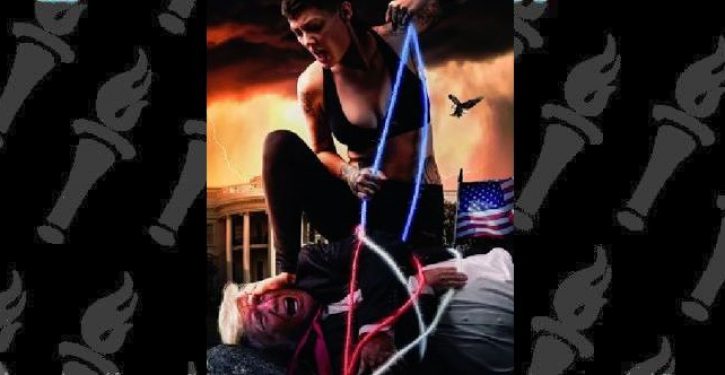 Conservative writer John Hayward tweeted earlier that “it’s interesting how some words that are as old as language itself, like ‘man’ and ‘woman,’ can be redefined in a heartbeat, but other words like ‘lynching’ acquired eternal and immutable deeper meaning a few decades ago and can only be used in a certain way by certain people.”

The reference was to the reaction among Democrats, and especially black members of the party, to Donald Trump’s use of the term lynching to describe the secretive inquisition the Dems are shamefully parading as an impeachment inquiry. Just before 8 a.m. today, the president tweeted:

So some day, if a Democrat becomes President and the Republicans win the House, even by a tiny margin, they can impeach the President, without due process or fairness or any legal rights. All Republicans must remember what they are witnessing here – a lynching. But we will WIN!

By noon, the left-leaning Guardian had a catalog of the many members of Congress who had condemned Trump “for using such a racially charged word to describe his political predicament.” (RELATED: The latest microaggression: A college building named for someone named Lynch) But before turning to the quotes, Guardian authors Tom McCarthy and Martin Pengelly added their own tainted two cents, opining:

The tweet fit with Trump’s history of racist remarks and his strategic use of cruelty. …

Then came the opprobrium:

“That is one word that no president ought to apply to himself,” the South Carolina representative James Clyburn, the House majority whip, said on CNN. “I’m not just a politician … I’m a product of the south. I know the history of that word.”

The California representative Karen Bass, chairwoman of the Congressional Black Caucus, told CNN Trump’s “lynching” tweet was consistent with his pattern of throwing out “racial bombs” to give “red meat” to his base when his back is against the wall.

Actually, I am able to furnish an answer to Rush’s rhetorical question. According to the Tuskegee Institute, 4,743 people were lynched in the U.S. between 1882 and 1968, including including 1,297 whites. So much for the claim of “people who look like you” being the lynchers only.

Not every black in Congress was outraged by Trump’s comparison. Sen. Tim Scott (R-S.C.) went on record as saying, “There’s no question that the impeachment process is the closet thing to a political death row trial, so I get his absolute rejection of the process.” Scott added that he “wouldn’t use the word lynching,” but who cares what he says anyway? As any Democrat can tell you, he’s nothing but an Uncle Tom.

Cartoon of the Day: Going green
Next Post
In Calif. primary, ‘no party preference’ voters will no longer be allowed to vote Republican