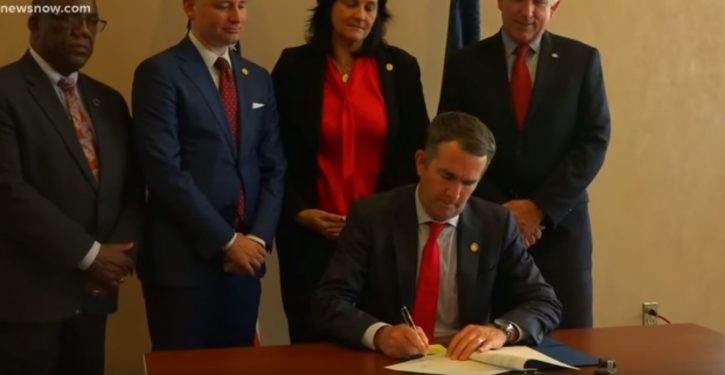 Taxes are likely to increase in Virginia after the Democrats take control of its state legislature this fall. Democratic spending proposals would add at least a billion dollars annually to the state budget. These costly proposals can’t be paid for without raising taxes, because the cost of existing state programs is already rising faster than state revenue. That leaves too little money to pay for new programs, unless there’s a tax increase.

More importantly, state revenue will shrink due to several labor policies that Democrats are likely to enact. Those policies will eliminate 100,000 jobs or more. Job losses reduce state income tax revenue, because unemployed people have less income. They also cut state sales tax revenue, because unemployed people have less money to spend. The result will be a growing gap between higher spending and lower revenue. To eliminate that gap, the state will eventually have to raise tax rates a lot.

The State Board of Education recently proposed increasing education spending by $950 million. Unfortunately, that proposal also contains a provision that undermines safeguards against wasteful government spending. It states that in the future, the “Board would no longer have authority to withhold these funds,” even when a school system fails to meet “state accountability standards and fails to implement corrective action plans.”

The proposed spending increase would not increase education spending across the board. Instead, it would go for things like a statewide “equity fund,” that would spend more on “schools with high concentrations of poverty.” Schools with high concentrations of low-income students already get extra money from the government through programs like Title 1. As a result, urban school systems with many poor students, such as the Richmond Public Schools, often receive much more money per student than neighboring school systems with less poverty.

The Board of Education is appointed by Virginia’s Democratic governor, and its plan to spend money on the “equity fund” has been endorsed by Democratic and progressive interest groups. So its spending increase may well become law. Pollsters expect the Democrats to take control of both houses of the Virginia legislature this fall, by narrow margins. (Although many races appear to be toss-ups that are too close to predict at this point.)

Even if the legislature does not create the new programs proposed by the Board, state spending will still rise faster than inflation, thanks to burgeoning state programs like Medicaid. Medicaid spending had been increasing at a 9 percent annual rate, even before Medicaid’s recent expansion in Virginia.

Spending in Virginia was already expected to rise faster than revenue in the coming years, absent a tax increase. That’s because state tax revenue is rising slower than projected, according the Virginia Department of Planning and Budget. Worsening the shortfall is the fact that the state’s pension funds are growing slower than anticipated, leaving taxpayers on the hook for more unfunded pension obligations.

Leftward changes in labor policy are likely to further increase state spending and cut tax revenue. Labor unions are pouring millions of dollars into this year’s elections in Virginia.  One of their major goals is to get the state government to mandate “Project Labor Agreements.” Whatever their merits, requiring them increases the cost of construction to taxpayers.

Unions and Democrats also want to abolish Virginia’s right-to-work law, which reduces the cost of living and attracts tens of thousands of non-union jobs to the state. Democratic candidates for the legislature overwhelmingly want to repeal the right-to-work law.

Getting rid of the law will reduce Virginia’s income tax and sales tax revenues by shrinking the size of its economy. States with right-to-work laws have double the job growth rate of states that lack them. The average right-to-work state has a higher income, adjusting for cost of living, than states that don’t.

That alone may wipe out more than 100,000 jobs. Most economists say a $15 minimum wage will drive up unemployment. For example, an economist at Moody’s calculated that up to 160,000 jobs will be lost in California’s manufacturing sector alone from an increase to $15. Economists estimate that 99,000 jobs will be lost in Maryland after it raises its minimum-wage to $15. Virginia could easily lose twice as many jobs as Maryland from a $15 minimum wage, because it is less wealthy and has a bigger population and thus more jobs to lose.

These job losses will reduce Virginia’s tax revenue, because unemployed people don’t pay much income tax or sales tax. The flow of federal money into Virginia – such as earned-income tax credits — will also fall. Jobless people don’t get such tax credits. And low-income people usually end up with smaller tax credits as their hourly wage rises due to a minimum wage increase, because those credits gradually phase out as income rises.

It’s one thing to raise the minimum wage to a modest level, like $10 or $11, so that it’s closer to the average wage. It’s quite another to set it so high that it is actually above the current average wage in many places. Doing the latter increases unemployment much, much more, because employers simply can’t afford to pay everybody at that higher level. They can’t pay everyone at an abnormally high rate for their region.

$15 is so high that it is above the median hourly wage in many Virginia counties, such as Mathews, Patrick, Grayson, and Floyd Counties. In such places, people don’t need that much to live on, because the cost of living is so low. For example, a home in Grayson County costs only a seventh what a home costs in more expensive areas of Virginia, like Arlington County. The average wage in such counties is below $15 per hour, yet most people there own their own home and few if any go hungry.

And employers there can’t pay $15 to everyone without going broke. Employers are not made of money. Even corporations have an average profit margin of only 7.9%. Small businesses often make far less. If an employer was paying its workers $10 per hour in a labor-intensive business (like a restaurant) and is making only a 7% profit, it can’t afford to increase employee pay all the way up to $15. Anything beyond $12 is likely to drive it out of business.

Even in wealthy areas that can handle a relatively-high minimum wage, a $15 minimum wage can wipe out some jobs, as the Washington Post has noted. A Seattle-based restaurant chain filed for bankruptcy after the city raised its local minimum wage to $15. It went broke, even though Seattle is a wealthy area where some businesses can get away with raising prices a lot in order to pay higher wages. The same thing is happening in New York City. It is much more prosperous and able to handle a high minimum wage than America as a whole. But even it is losing some of its restaurant jobs due to the city’s recently-enacted $15 minimum wage.

CORRECTION: An earlier version of this stated that Virginia’s Buchanan County had a median hourly wage below $15. That appears to no longer be the case.