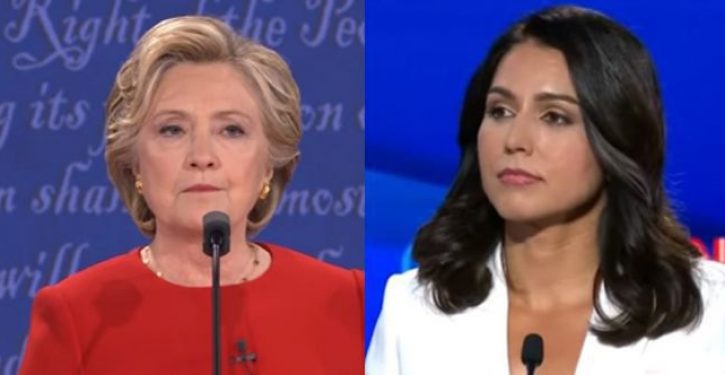 This is a war I’d like to see both sides to lose. Rep. Tulsi Gabbard (D-Hawaii), the former vice-chair of the DNC, has responded to Hillary Clinton’s insults by throwing down the gauntlet.

“People warned me in 2016 that my endorsement of Bernie Sanders would be the end of my political career,” Gabbard said in the video released Sunday afternoon. “They said, ‘Clinton will never forget,’ that she and her rich and powerful friends, her allies in politics and the media will make sure that you are destroyed. Well, there have been countless hit pieces full of smears against me from day one of this campaign. They’ve tried to destroy my reputation and my lifetime or service because I stood up to them.”

Hillary & her gang of rich, powerful elite are going after me to send a msg to YOU: “Shut up, toe the line, or be destroyed.” But we, the people, will NOT be silenced. Join me in taking our Democratic Party back & leading a govt of, by & for the people! https://t.co/TOcAOPrxye pic.twitter.com/TahfE2XOek

The battle began when Clinton accusing Gabbard of being a Russian asset. Although Hillary didn’t mention her by name, Clinton spokesman Nick Merrill was asked whether crooked Hillary was referring to Tulsi Gabbard. He replied, “If the nesting doll fits.”

Gabbard issued a stinging response to the two-time presidential loser.

… powerful allies in the corporate media and war machine, afraid of the threat I pose.

It’s now clear that this primary is between you and me. Don’t cowardly hide behind your proxies. Join the race directly.

Gabbard is not my political cup of tea, actually: After eight years of Obama, it’s hard to imagine ever voting for a candidate from Hawaii. But she should be respected. She’s is a decorated combat veteran who fought in Iraq. The closest Hillary ever came to being in combat was her false claim that when arriving in Bosnia in 1996 she had to dodge sniper fire.

Gabbard found some unexpected support from one of her opponents for the Democratic nomination:

Tulsi Gabbard has put her life on the line to defend this country. People can disagree on issues, but it is outrageous for anyone to suggest that Tulsi is a foreign asset.

Will Clinton take the bait and throw her hat in the ring? She’s been throwing hints once again that she might.

If she does, grab the popcorn. We’re in for a fun ride.

If Dems are so big on respecting norms, why don’t they do it in their impeachment probe?
Next Post
Iran jails nine Christians for leaving Islam