There have been indications that former Vice President Joe Biden is living in the past. One of these manifested itself in September, when he appealed to American parents to “make sure” they “have the record player on at night,” prompting a number of millennials to ask what a record player was.

Yet another indication came in his remarks at a fundraiser in New York last Friday in which he was taking a shot at Donald Trump over his now-aborted plan to hold the G7 meeting at one of his resorts. Only Biden didn’t to the G7 as such but as the G8, which it hasn’t been since the Group of 7 nations jettisoned Russia in 2014. It was not the first time Biden has so misspoke.

The gaffe was tweeted out by NBC News’s Kelly O’Donnell, perhaps suggesting that the so-called elite media are now putting their money behind a different horse to win the Democratic nomination. (They wouldn’t be alone. The latest betting odds recorded by RealClear Politics shows Elizabeth Warren with a 51.8% likelihood of carrying the nomination, while Biden lags behind her by 31.9%.)

A pool report from a @JoeBiden fundraiser tonight in New York includes a quote where Biden refers to the G8, but it’s been the Group of 7 nations since Russia was kicked out in’14. He criticized Trump for his now cancelled plan to host at Trump Doral. pic.twitter.com/zlMYZu3DzM

It is possible, of course, that this latest gaffe is not an anachronism on Biden’s part but — even worse — another indicator that his mind is slipping. He recently spoke of “clipping coupons in the stock market.”

Hillary Clinton tries her hand at comedy, urged to stick with her day job (whatever that is)
Next Post
Cartoon of the Day: Shortfall 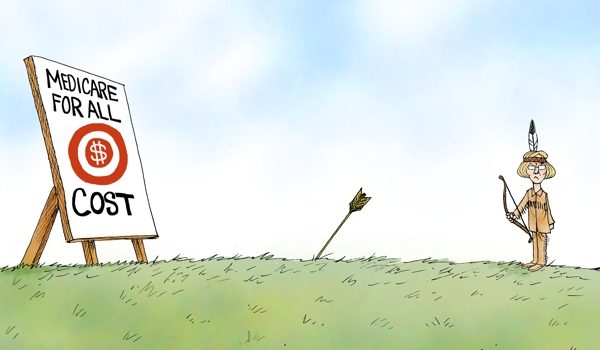