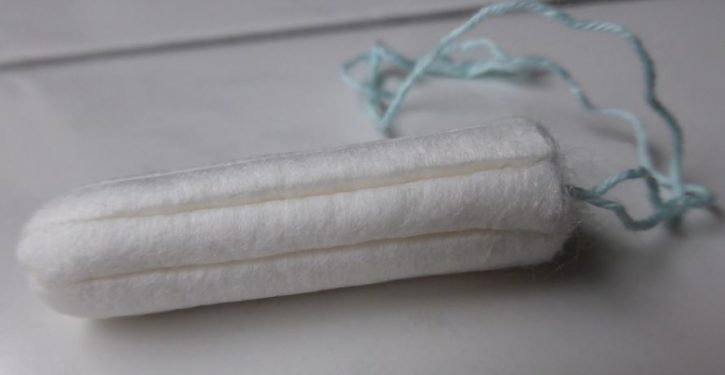 The transcript of a show that aired Friday on radio station WBUR emphasizes that “on average, people who menstruate spend an estimated $150 million a year just on the sales tax for tampons and pads.” (Note that’s “people who menstruate,” not just women.)

Now there is a movement afoot to outlaw sales tax on tampons and pads. Its name is “Period Equity,” and its co-founder, activist Jennifer Weiss-Wolf, “says she got together with a group of lawyers to make the case that taxing menstrual products is ‘sex-based discrimination and therefore unconstitutional and therefore illegal.'”

“It’s not really just a matter now of asking legislators to do the right thing,” Weiss-Wolf is quoted as saying, “but it’s bringing the force of the law to let them know that they must cease this practice.”

The average woman has her period for 2,535 days of her life. That’s nearly seven years’ time of making sure you have a pad or tampon, finding a makeshift solution if you don’t, and managing pain and discomfort.

That may be so, but it’s also a medical fact that 50% of all develop an enlarged prostate between the ages of 51 and 60. Should the cost of medication to reduce the frequency of urination from this condition also be non-taxed? With the average male life expectancy in the U.S. currently estimated at 78.7 years, men who develop an enlarged prostate at age 55.5 (halfway between 51 and 60) suffer with their condition for over 23 years on average — more than three times longer than women experience menstrual periods.

By the way, the phrase “people who menstruate” in the KBUR article is obviously intentional. The above-mentioned Times article argues that “transgender and nonbinary people” also “menstruate,” and in May of this year, Brookline, Mass. becomes first municipality in nation to have free tampons in public men’s rooms.