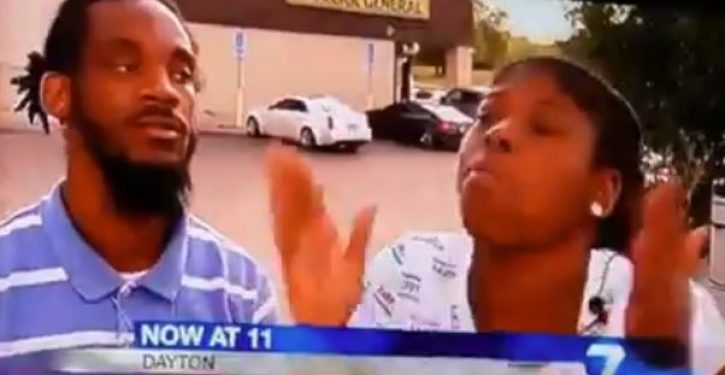 We have seen this scenario play out dozens of times. An armed robber enters a store where the clerk turns out to be a good guy with a gun. When the smoke clears, the robber is dead and his family is outraged.

But what was Dayton, Ohio station WHIO’s purpose in running an interview with the family of the latest victim of his own criminality, 23-year-old Roosevelt Rappley, who among other things berate the clerk for exercising his constitutional right to defend himself?

According to the Dayton Daily News, Rappley entered the store brandishing a gun. The transcript of the clerk’s 911 call paints a detailed picture of what happened next:

I just had somebody try to attempt and rob me over here at Dollar General on Gettysburg. Came in with a firearm, threatened to take money out the drawer, pointed a gun at me and my staff members. He pointed a gun at me, I had a firearm on me, I pulled my firearm and I shot him in self-defense.

The article further notes that Rappley had “priors,” including a “pending weapons charges and possible involvement in other commercial robberies in the area, including the recent robbery of a Dollar General on Main Street.”

And while one can understand the family’s shock and grief over the death of the young man, what did the station hope to accomplish by showing their irrational reactions to the event, which make up a good portion of this news video? Was it to make the family look ignorant, as the person who posted this tweet suggests? Was it to sensationalize the shooting in order to make some statement about gun violence?

Imagine how exceptionally ignorant you have to be, to be upset that your brother who was committing ARMED ROBBERY got shot by the clerk defending themself. pic.twitter.com/QfkufojOFV

BREAKING: Trump administration threatens sanctions on Turkey
Next Post
The Senate is likelier to remove Trump after impeachment than you think