Or so she thinks. The intellectually challenged freshman representative based her jubilant declaration on Twitter not on firsthand or even secondhand information. Instead it comes from a tweet by the New York Times’s David Leonhardt promoting an article he wrote in which he sings hosannas to a book by two Berkeley economists titled “The Triumph of Injustice.” In the interests of full disclosure, I haven’t read the book, partly because it won’t be out until next, so I can’t fairly assess its overarching claim that the richest Americans now pay taxes at a lower rate than any income group thanks to loopholes and deductions. I have read other books by other Keynesian economists that make similarly fantastic claims and can say without fear of contradiction that many of these have turned out to be balderdash, but my point here is that I doubt Ocasio-Cortez has read the book either.

That has not prevented her from extrapolating from it that (in the words of Leonhardt):

The overall tax rate on the richest 400 households last year was only 23 percent, meaning that their combined tax payments equaled less than one quarter of their total income. This overall rate was 70 percent in 1950 and 47 percent in 1980.

Hey everyone, I think I figured out how we’re going to pay for it ⬇️ https://t.co/zhKcUFdqYW

Interestingly, ten minutes after posting her tweet, Ocasio-Cortez was back tsk-tsking her critics for purportedly saying, “‘it’s not enough to pay for it!’ even though ‘it’ isn’t even defined in the tweet.”

(I love how GOP pundits are already saying “it’s not enough to pay for it!” even though “it” isn’t even defined in the tweet ?

It’s almost as if regardless of the circumstance, the GOP take is: “Whatever you’re talking about, don’t tax the rich – no matter what!”)

One could point out that Ocasio-Cortez is guilty of the same offense, having decided that Leonhardt (as a proxy for the book’s authors, Emmanuel Saez and Gabriel Zucman) has crunched the numbers when in fact he doesn’t state what “it” is either. Instead, let’s determine “it.” According to the Forbes list of 400 richest Americans published annually since 1982, the combined net worth for 2019 is $2.96 trillion, which is up over 2% for the previous year.

So, if the Green New Deal is still projected to cost $93 trillion, Ocasio-Cortez comes up $90 trillion short, even if Leonhardt’s (and Saez’s and Zucman’s) numbers check. 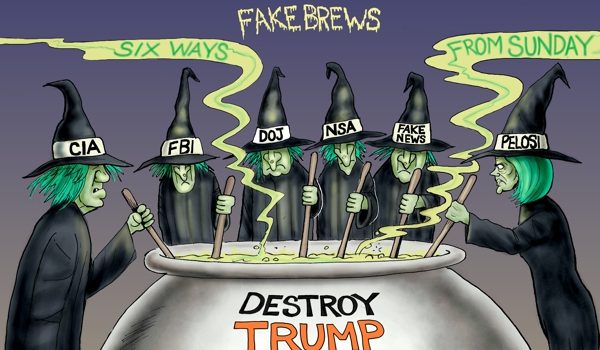 Cartoon of the Day: Witches hunting
Next Post
Report shows FBI official received sports tickets from CNN reporter, lied about it to investigators