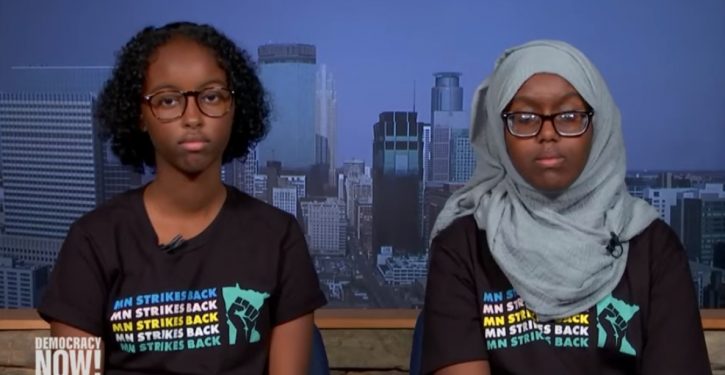 It probably comes as no surprise that the daughter of Rep. Ilhan Omar, herself a major Trump critic, had some sharp words for the president in an appearance Friday on the progressive-left web broadcast of Democracy Now!

BizPacReview has a transcript of some of young Isra Hirsi’s remarks:

Millions of people across this country are being impacted by [your inaction]. Us young people are not going to stand down and allow this inaction to continue. We will continue to be on the streets until we see some change from your office. We are going to be voting you out because we need a leader that is actually going to take action on this incredible crisis.

The segment with Isra Hirsi starts shortly after the 11:00 mark.

It also won’t be a surprise that the “incredible crisis” Isra Hirsi refers to is the “climate change” crisis.  High school students across the country left school on Friday to hold protests on this topic, and Isra, from her high school in Minnesota, was one of them.

And presumably the financial and organizational backing of Women’s March and other Soros-funded groups as well.  The Youth Climate Strike “movement” looks very much like the adult-organized, student-fronted anti-gun movement launched after the high school shooting in Parkland, Florida.

Regarding her own motives, Isra explains: “Growing up in MN with the intense climate and in diverse communities, I have developed a very well rounded knowledge of climate change. Seeing pipelines being built in my state, extreme snow conditions, and hearing about Flint MI, I really wanted to do something about it.”

The question of what Isra wants to do about “extreme” snow conditions in Minnesota is an intriguing one.  But she has an even more important priority, articulated here: “As a black Muslim woman, it is important to me to have intersectionality be brought into this fight!”

Maybe climate change just hasn’t been combated with intersectionality yet. Isra says she is tired of waiting for the adults to do something about climate change, and that was key for her in becoming an activist.

As one might expect, her teen activism isn’t really about the kids doing anything themselves.  It’s all about mounting protests and trying to get the adults to “do something.”  Isra gave an interview to Greenpeace in February 2019, not long before the high school walkout in March.  She told Greenpeace at the time that she was inspired by Swedish teen Greta Thunberg’s weekly climate strikes.  Trying to make the adults “do something” (in her case, “listen to the scientists”) is Ms. Thunberg’s approach too.

At least one thing Isra’s determined on has a very teenage ring to it.  “This movement is completely led by young people. We are here and we’re never going to back down,” she told Greenpeace.  “This one strike is not the endgame. We’re not going to shut up. Adults — if you feel uncomfortable now, you’re going to feel uncomfortable for a while.” 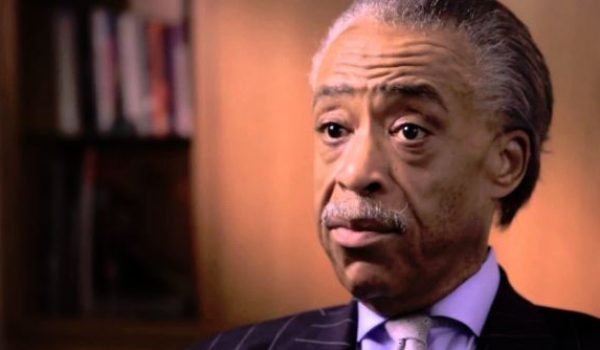 House hearing erupts after GOP rep confronts Al Sharpton over anti-Semitic, anti-white remarks
Next Post
If you think James Comey is going to be indicted, Trey Gowdy has bad news for you