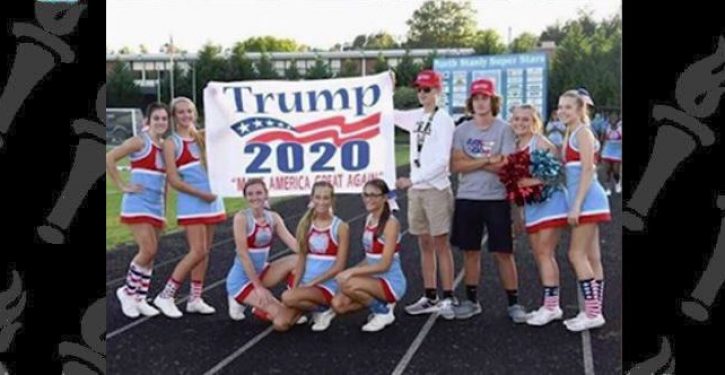 Like it or not, Donald Trump is the president. Some teenagers at a school in North Carolina appear to like it. And now they are in hot water for daring to show their support for the nation’s leader.

According to Fox 5 Washington:

A North Carolina cheerleading squad is in trouble after displaying signs supporting President Donald Trump at a football game.

The North Stanly High School squad has been placed on probation after posing with a banner supporting President Trump before a game at the end of last month.

The school said a student attending the game brought the flag in, and the picture was taken before the game started, and Stanly County superintendent Dr. Jeff James says the team was told not to do it again.

The mother of one of the teens is quoted as reporting that the girls are now receiving threats and are being labeled racist and bigots. Ah, the tolerant, civil Left!

“We figured it would be covered by our first amendment rights,” one of the cheerleaders correctly observed. If the school is teaching these students civics, it appears they are doing a good job (even though some of the administrators could clearly use remediation in that subject).

The North Carolina High School Athletic Association maintains that the display violates their policy on schools promoting political campaigns, which makes one wonder: What would the school’s reaction be if students asked to be excused on Sept. 20 to join a nationwide “climate strike” planned for that day? Students in New York City have already received permission to cut classes to march with Swedish climate change teen activist Greta Thunberg, who is in town to speak at the U.N.

Granted, this is not a political campaign per se, but it bespeaks an obvious allegiance to one of the two main political parties over the other. Furthermore, like the administrators at North Stanly High, Thunberg is a Trump detractor so it sounds like a mulitple-tissue match.

Abortion providers say there has been an uptick in violence due to restrictive abortion legislation
Next Post
Dem Sen. Kyrsten Sinema is facing censure from her own party. Wait till you hear her ‘crime’