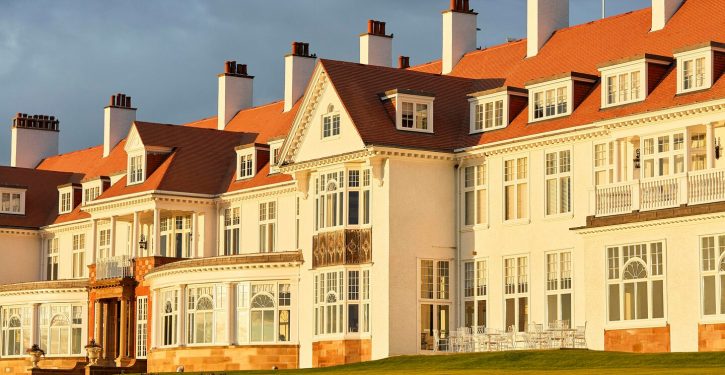 “The U.S. Air Force has lodged crews at President Donald Trump’s Scotland resort up to 40 times since 2015, a figure that is far higher than previously known,” writes Politico, which goes on to report:

The tally represents the preliminary results of an Air Force review launched after POLITICO reported last week that an Air National Guard crew stayed at Turnberry in March. Congressional Democrats have also been investigating military stays at the property, but have yet to receive any information from the Pentagon.

The figure does not indicate how many of the stays have occurred since Trump became president. But the Air Force has significantly ramped up its overnight stops in Scotland under Trump after signing a contract with the Prestwick Airport. …

At issue is where military crews are housed when their aircraft stop to refuel at Prestwick Airport situated 20-plus miles from Trump’s resort. The implied scandal — that the real estate mogul is making money off his presidency, which is expressly prohibited by the Emoluments Clause of the Constitution — has reared its ugly head before in relation to other Trump properties.

For his part, the president has denied any knowledge of the arrangement in Scotland or of kickbacks resulting from it:

I know nothing about an Air Force plane landing at an airport (which I do not own and have nothing to do with) near Turnberry Resort (which I do own) in Scotland, and filling up with fuel, with the crew staying overnight at Turnberry (they have good taste!). NOTHING TO DO WITH ME

Indeed, when you dig a little deeper into the story, as Fox News did, a number of interesting details emerge.

Such as the fact that the contract with the Prestwick Airport alluded to in the Politico piece was in fact “signed during the Obama administration. The Washington Post also reported that the airport was sending visiting crews to Trump’s course before he ran for president.” In fact, the earliest stays at Turnberry occurred in 2015 and 2016, while Obama was still president.

The Air Force said in a statement that relatively few crews stayed at Trump Turnberry between 2015 and 2019.

“We reviewed the vast majority of the 659 overnight stays of Air Force crews in the vicinity at Glasgow Prestwick Airport between 2015 and 2019. Approximately six percent of those crews stayed at the Trump Turnberry,” the statement from an Air Force official said. “As a practice, we generally send aircrews to the closest, most suitable accommodations within the government hotel rate. The review also indicated that about 75 percent of the crews stayed in the immediate vicinity of the airfield and 18 percent stayed in Glasgow.”

Then there’s the matter of room rate. Here, too, the facts fail to comport with intimations of scandal:

The New York Times … found that the deal involved the Air Force paying a discounted rate of as little as $130 a night, compared with a typical rate of more than $300 a night. It was one of 13 hotels booked by the airport, and is approximately 40 minutes away from the airport.

It’s come to this: Even Eric Holder warns Democrats that ‘borders mean something’
Next Post
Dump Trump to prevent socialism