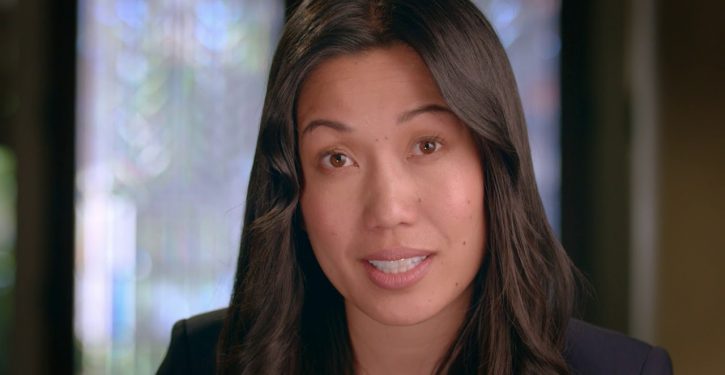 If you’ve ever doubted that the term racism has become so diluted from overuse that it has lost all meaning, this should erase any lingering doubts.

Exhibit A is an ad that ran during last night’s Republican base announcing the formation of a new right-wing super PAC called New Faces GOP. The ad is narrated by Elizabeth Heng, a former California Republican candidate for the House of Representatives.

As the ad opens, Heng can be heard saying, “This is the face of socialism. And, ignorance.” As she utters these words, a photo of Rep. Alexandra Ocasio-Cortez appears. Suddenly the image bursts into flame, revealing beneath a black-and-white photo of skulls, dissolving into another of the beleaguered victims of the Pol Pot regime in Cambodia. “Does Alexandra Ocasio-Cortez know the horror of socialism?” Heng asks, before going on to reveal that her father “was minutes from death in Cambodia, before a forced marriage saved his life. That’s socialism.”

The ad concludes with Heng coming out from behind the camera and intoning, “Mine is a face of freedom. My skin is not white, I’m not outrageous, racist, nor socialist. I’m a Republican.”

The purpose of the ad, including the symbolism of Ocasio-Cortez’s likeness being consumed by flames, is fairly self-evident. This hasn’t prevented liberal media outlets from taking exception with the message and even leaping to Ocasio-Cortez’s defense. Here’s Newsweek:

One could accuse Newsweek of being disingenuous for omitting the absurd price tag of this brand of socialism, but Ocasio-Cortez for her part was unable to get past the image of herself on fire. And what did she take away from that? This.

Republicans are running TV ads setting pictures of me on fire to convince people they aren’t racist.

She later doubled down, adding this:

Know that this wasn’t an ad for young conservatives of color – that was the pretense.

What you just watched was a love letter to the GOP’s white supremacist case. https://t.co/zvp1EB02c5

So Elizabeth Heng, the voice-over for the ad, is herself a woman of color, but Ocasio-Cortez insists she is a racist who supports the “GOP’s white supremacist case.”

During debate, Biden claimed he didn’t ‘lock people up in cages.’ The record says otherwise
Next Post
Was there really no American flag on stage at the Democratic debate in Houston?