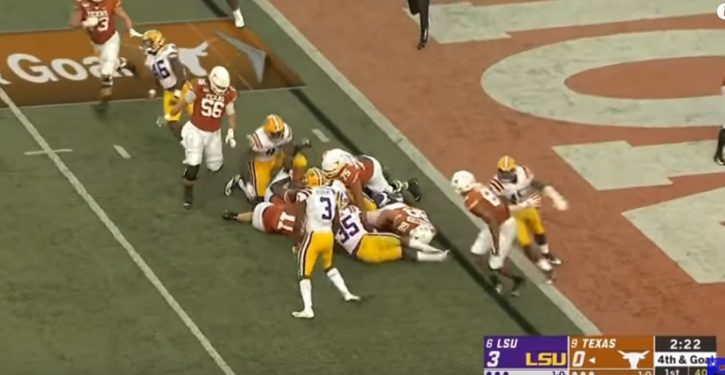 We know everyone will be watching the Democratic debate this evening rather than wasting time with Bucs at Panthers.  Andy Yang has promised to do something really big and unprecedented (we don’t want to think about it, frankly), plus there are all those people dangling from the bridge in Houston messing with traffic.  (Update: As we type, Bernie Sanders’s acoustics are zorching around like he’s dangling from a bridge.  He wants Medicare for all, if you weren’t aware.  He wants it more than any of those other pikers on the stage with him want it.  Yang apparently promised to give some people $1,000 a month, as if he were Oprah or something.)

But if you’re hurting for amusement on Friday evening, the FBS has you set right up.  Kansas (motto: “What difference, at this point, does it make?”) at Boston College may not get your heart started, but the Tar Heels are renewing their Storied Rivalry at Wake Forest Friday night, with Wake actually giving 3 and not looking completely terrible this year.  Could be fun.

Yeah, yeah, we know: Alabama will be at South Carolina (motto: The Other USC) this week.  Calm down. We’ll get to it.

The University of Tulsa Golden Hurricane, which beat Notre Dame 28-27 on 30 October 2010, will no doubt face another comeuppance on Saturday after the win at San Jose State.  Tulsa hosts Oklahoma State, which comes in on a give of 14, and that skimpy spread only because OSU patron saint T. Boone Pickens just went on to glory.  (Yes, we made up that point spread analysis.  But Pickens did pass away, and will certainly be missed around Stillwater.)  The TU D will do itself proud if it can hold the Okie-Pokes to the low 30s.  We don’t despair of getting a couple of scoring licks in either.  But home field advantage is something of a joke as between Tulsa and Stillwater, the interval between them being driven by some motivated entrepreneurs to get to and from work every day, and used by others for parallel parking.

Oklahoma, now #5 after LSU’s well-deserved ascent to #4, filleted poor South Dakota last week, and gets a crack at UCLA in Pasadena on Saturday evening.  With Muleshoe Man at the helm and Jalen Hurts slapping himself to do better every time he retreats to the sideline, we have less of the old creeping fear of Complacency Syndrome, and hope OU will requite the oddsquad’s 23.5-point nod.  The Bruins are in a deep trough of atrocity (they’re having to offer free tickets to the game to try  and gets butts in the seats); even the Oklahoma defense can dominate them if it makes an effort.

Navy hosts AAC opponent East Carolina on Saturday, each coming in with one win. ECU is looking a little more respectable than last season; Navy well-drilled but largely a one-trick pony with the option.  The Mids give 7.5 between the checkerboards.

Army is off to take on UT-San Antonio after the heartbreaker at Michigan last week (and although we haven’t specifically checked, we feel sure the Black Knights left the visitors’ locker room clean enough to eat off the floor).  Partly on the strength of the Army performance in Ann Arbor, they’re giving 17.5 to the Roadrunners.  But it’s also because UTSA isn’t the best bet in town; they fell 63-14 to Baylor, and their win in Week 1 was over local FCS squad Incarnate Word.

Air Force is 1-0 heading to Colorado (motto: “We take a pounding!”), which so far has been giving poundings this year, trouncing Colorado State in their Storied Rivalry in Week 1, and edging Nebraska (former #25) in O/T.  Buffaloes give 3-ish.

Virginia Tech hosts Furman (FCS, Southern) for what should be another pleasant scrimmage, although FCS #13 Furman isn’t chopped liver.  The Paladins have a lively offense, with QB Darren Grainger and his skill squad racking up 42 points in a loss to FBS junior Georgia State last week.  The Hokies will have to work for this one.

Nevada doesn’t get the break it might look like, after being pounded as if it were grudge match by Oregon last week.  The Wolf Pack hosts WEEE-ber State (FCS, Big Sky) Saturday evening – but, again, the Wildcats are a tough FCS club, currently ranked #6.  They held San Diego State to 6 points in a low-scoring Weber loss in Week 1.

LSU is cruising at #4 after the big win over new #12 Texas, and will take on in-state, cross-ranks foe Northwestern State (FCS, Southland), with what we assume will be predictable consequences.  Get it out of your system, guys.

Kansas State road-trips to Mississippi State for what looks to be a top-quality cross-conference match in the early game on Saturday.  The Bulldogs are giving 7, but we’re not counting the ‘Cats out of this one.  Good football alert for your smart phone.

TCU will also be headed cross-country (and conference) to take on Purdue in an evening bout.  Purdue dropped the first one to Wyoming, which might have prejudiced the oddsdudes against them, but the Toads have just the one win over FCS school Arkansas-Pine Bluff, so the TCU give of 2.5 on the road may be a tad optimistic.

Toledo is back in the Glass Bowl on Saturday hosting Murray State (FCS, Ohio Valley), which doesn’t suck eggs but naturally lost badly to #3 Georgia last week.  We figure the Rockets have got this one, but the Racers are going to put up some points.

Wyoming heads 2-0 into hosting duties versus visiting Idaho (FCS, Big Sky), which arrives 1-1 (Week 1 at Penn State best left unmentioned) and will probably leave in worse shape.  But a September evening in Laramie? Throw us into that briar patch.

#1 Clemson gives 27.5 heading to Nemesis Syracuse in the marquee slot Saturday evening, and we’ll all be on pins and needles to see if they’ve broken the hoodoo on the Loud House.

#2 Alabama is off to take on South Carolina (motto: The Other USC) for the first time since 2010.  Dang, that was a big one for the 2010 Gamecocks, which unseated the then-#1 Tide in a rattling 35-21 win.  There’s little prospect of anything similar happening on Saturday; Muschamp’s boys dropped Week 1 to a meh-and-a-half North Carolina, and still have some more, er, rebuilding to do.  The visiting Tide gives 25.5.

#10 Michigan has a well-timed week off: not only is the reflection time welcome, but the lurkers just below the Top 10 aren’t playing games big enough to vault them past the Wolverines before next week.

In another meh week of overdogs and creampuffs, there are a few games in the weirdly interesting category on Saturday.

Stanford at #17 Central Florida could actually be a pretty darn good game.  The Golden Knights are giving 8.5, and their vaunted D is more than a match for the Muted Mauve these days.  But their offense lags that level just enough to make it, as we say … interesting.  It’s on ESPN.

Arizona State, meanwhile, is off to take on Michigan State, both teams coming in 2-0 and neither having shown a lot of spark as yet.  Another rare cross-conference match-up that holds, oh heck, interest, at least for the aficionado.  Spartans give 15, which frankly is probably about right, cross-conference interest notwithstanding.

Darned if we don’t have another one: Colorado State at Arkansas (-9.5).  Not giving the Rams a lot of hope here, but the spread is narrower than you might expect.

We’re excited to report that Cal will be entertaining none other than North Texas, and there’s a line and everything (Cal -14).

Texas Tech rounds out the evening at Arizona, giving 2 in a match that at one time would have been pretty major.  Pendulum swings.

In Storied Rivalry action, of course, Iowa is getting its Cy-Hawk business done early, with #19 Iowa (-2) at Iowa State for another patented near-pick-‘em.  The Cyclones have one FCS game (Northern Iowa, Missouri Valley) under their belt, in which it took them 3 overtimes to prevail (granted, UNI is the FCS #10).  So it’s the rivalry factor and recent history keeping the line so close in Ames.

In FCS, McNeese State takes one more out-of-conference flyer on Saturday hosting Alcorn State of Lorman, Mississippi and the Southwest Athletic Conference, for a balmy evening bout.  Alcorn State lost to FBS’s Southern Miss in Week 1, but slaughtered Mississippi College in Week 2.  Alcorn got a few votes in the FCS Coaches Poll this past week; McNeese dropped off the radar after the loss in Stillwater, so this game is a way to become the blip again.  Hot, humid, and overcast for the 6 PM kickoff in Lake Charles.

In Div II, Slippery Rock has vaulted to #11 in the polling, and will kick off Pennsylvania State Athletic Conference (PSAC) action hosting Shippensburg on Saturday.  Shippensburg fell to Clarion last week, while SRU is currently the top-ranked team in PSAC (Indiana (PA) is #24, and California (PA) is lurking).  A wet day on Saturday, with game-time (6 PM) starting around 70 and the possibility that the showers will be slacking off at that point.

UCO, we’re excited to report, is up 28-17 on Nebraska-Kearney this Thursday evening with less than 2 minutes left in the game.   We’re trusting the Bronchos to bring this one home.  (Update: yes, they hung on and won it 28-23.)  They’ll be hosting Lincoln in Edmond a week from Saturday.

In Div III, Rose-Hulman took a licking and kept on ticking with an out-of-conference loss of 66-14 to the Mount Union monster.  They’re doing the same circuit they did in 2018, following up the Mount Union game with a match-up against Rhodes College of Memphis, which prevailed over them last year in Terre Haute.  This year the Fightin’ Engineers will be in Memphis for the game.  Rhodes plays in the Southern Athletic Association; RHIT will start Heartland Collegiate play next week.  Can’t remember if we mentioned last year that Priscilla Presley and Malcolm Forbes are Rhodes alums, but if not, consider it mentioned.  Hot on Saturday: probably down to upper 80s for an 8 PM kickoff.

Christopher Newport lost to North Central last week, but has the usual good shot at knocking off Hampden-Sydney on Saturday before starting the NJAC gauntlet.  In a rainy week, it looks like Saturday will cut us a break, with mid-70s and cloudy, but no precip expected, for the 7 PM game start in Newport News.

Merchant Marine turned out to be hosting a ringer last week in FDU-Florham, which prevailed in a 56-48 shootout on Parents’ Weekend in Kings Point.  After falling to 21-6 in the 1Q, USMMA rallied with 22 points in the 2Q, but missed it by that much at the final whistle after a seesaw match.  The Mariners are off this weekend and will host SUNY Maritime for Homecoming on the 21st.