Boris Johnson suffered a major loss in Parliament on Tuesday, as the departure of a single Conservative to sit with the Liberal Democrats eliminated his governing majority, and a subsequent vote saw the MPs seize the parliamentary agenda from him.  The latter means the House of Commons can now pass laws that compel Johnson’s compliance.

As early as Wednesday, Parliament is likely to introduce a bill to delay Brexit again until 31 January 2020.  The vote could be held before Parliament adjourns under the prorogation order next week.

Delaying Brexit was also the upshot of all the parliamentary maneuvers undertaken during Theresa May’s turn at the helm – including several maneuvers of her own.

The question that occurs to one out here in the cheap seats is this.  In light of the repeated bad-faith actions it has required to bring Parliament and the UK to the current pass, is there any basis for thinking that delaying Brexit just happens to be the outcome of a lot of people acting in good faith?

I’m not convinced there is nothing going on here other than Remainers having principled objections to whatever is proposed to them.  For one thing, 21 Conservatives crossing the aisle in Tuesday’s make-or-break agenda vote isn’t that.  It’s something else – just as other sabotage efforts from inside the Conservative Party have been all along (e.g., MPs voting first one way and then the other on the same deal; whatever it takes to stall the actual prospect of Brexit).

The 21 rebels. All prepared to lose the whip and their jobs to block No Deal. pic.twitter.com/nVZAcyVr6p

The determination to thwart the people’s decision in the 2016 Brexit referendum could not be showing itself more starkly.  No matter what, the near-term goal of the anti-Brexit “resistance” is to ensure that (a) Brexit doesn’t happen on whatever its current schedule is, and (b) there is no due-process way to bring it to the point of happening.

Johnson can call for a new election on 14 October, the fallback in discussion since he took over as Conservative leader and prime minister.  But as the whole UK is now pointing out in chorus, he needs votes from Labour to set a snap election, and he probably won’t have them.  As the price of agreeing to an election, Labour will presumably demand that Johnson tie his hands so that he can’t switch plans and execute a “crash out,” no-deal Brexit at the end of October if the election solidifies a governing majority for him.

The interesting thing about that calculation is that it implies expecting Johnson to have the support of voters.  In other words, he’d win a snap election (in one permutation of the analysis, he’d do it in a constituency-targeted package with Nigel Farage’s Brexit Party).  That’s why Labour can’t risk agreeing to an election unless Johnson ties his hands first.

(This Periscope video of Brexit Party speakers on Tuesday has very interesting moments, although they’re a bit scattered. Make sure to watch all of Farage’s opener.  Some of it is in-the-weeds national politics, but the sense of facing a major crisis point in the historical career of consensual, democratic politics is palpable and justified.)

Lurking over all of this is the unspoken acknowledgment that Brexit is what the voters chose in 2016, and Brexit is what the majority really wants.  It even seems from behavioral clues like Labour is clearer on that than the wobbly Tories are.  Labour just overtly opposes Brexit anyway, and loses less from being clear-eyed about the reality of the vote.

The endless series of bad-faith maneuvers against the cleanly-demonstrated will of the people can’t help looking an awful lot like the similar maneuvers of the “permanent state” in Washington, D.C. over the last three years.  The anti-Brexit forces, like the anti-Trump forces, seem to be prepared to burn down everything – consensual government itself, the people’s trust, the nation’s future – to prevent this one big thing they cannot abide.

The obsessive, near-demented insistence on not executing what the people voted for in due-process elections is hard to miss.  I’m not sure we’ve really come to grips with the reality that our complacent, unexamined assumptions about the motives here just don’t cut it.  A fight this dirty isn’t about good governance or abstract principles.  Brexit imperils neither.  All the same issues and principles can be hashed out through the political process after a Brexit, and in the world’s premier example of a “parliament” at that.  The EU has nothing to teach Britain about fair play and a level playing field in politics.  Brits already know from hashing out public issues; they set the standard.  The issues themselves just won’t be weighted out from under British voters by a heavy finger on the scale from Brussels.

In the UK, moreover, there’s no mental obfuscation from a “Hillary Clinton” with a paper trail to cover up, or “Obama” with a legacy to preserve.  Those, frankly, cannot be the “real” motives of the permanent-state maneuver forces in the U.S.; as motives, they are simply too weak and limited.  But the complacent assumption has been that some combination of them is what’s driving the frenzied determination to get rid of Trump at all costs.  In the UK, there is no such red herring to distract clear-eyed analysis.

The Brexit case thus makes it easier to see that there’s something else going on.  Maybe it’s easier to see from outside, by those who don’t have a stake in the local politics of party leadership and related legislative maneuvering.  But whatever’s going on, all roads lead to endlessly delaying Brexit – no matter what it takes. 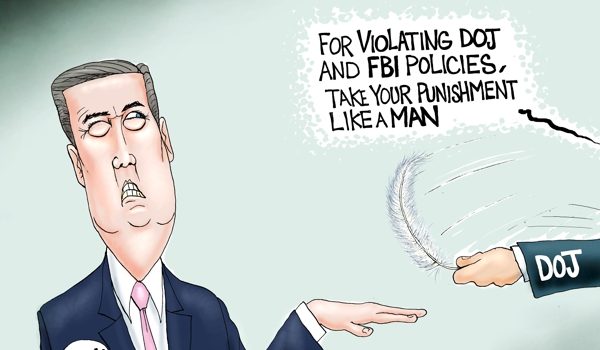 Cartoon of the Day: Judgment Day
Next Post
Biden on his gaffes: ‘Details are irrelevant in terms of decision making’