On corralling radical Iran in the ongoing shadow war, a couple of quick updates for Friday night. (The date will read Saturday – 24 August – by the time this posts.)

When we last checked in on the drama of (now former) oil tanker Grace 1, the ship taken down by UK commandos on 4 July, which had been sitting in Gibraltar in the weeks since, Grace 1 was reflagged to Iran, renamed Adrian Darya 1, under new ownership, and cleared by the Gibraltar high court to leave.  The U.S. issued a warrant for detention of the ship, but Gibraltar declined to honor it.  Adrian Darya 1 set out with a declared destination of Kalamata, Greece, carrying the original, still undelivered cargo of crude oil from Iran.

The intention for the tanker was reportedly to refuel in Kalamata.  But observers pointed out that the ship’s real purpose was probably to attempt ship-to-ship oil transfers in the Messenian Gulf offshore from Kalamata.  Greece announced Thursday that Adrian Darya 1 would not be accommodated if she attempted to come to Kalamata – presumably an indication that there had been U.S. pressure.

Adrian Darya 1 has been heading east in the Mediterranean, and was in the Strait of Sicily in the past couple of hours as I type.  The ship has just changed the destination indicated by her AIS reporting system, however.  It now reflects her destination as Mersin, Turkey.

Mersin is on Turkey’s southern coast, and is the major port closest to the border with Syria.  The convenient aspect of Mersin (other than its excellence as a liberty port) is that a tanker coming from Syria need not enter international waters to get from Syria’s territorial waters to Turkey’s.

Thus, if there’s a plan for ship-to-ship transfers off Mersin, the receiving ship could head to Syria with a load and never be in international waters.  (It would also be possible for Adrian Darya 1 to move from Turkish waters to Syrian waters, but there’s reason for Iran to fear that the U.S. would interdict the tanker in Syrian waters, on the same principle by which U.S. forces have operated on Syrian land territory.)

We’ll see what happens.  The U.S. will undoubtedly exert pressure on Turkey to reject entry by Adrian Darya 1.  And all things being equal, there’s a good chance Turkey will do so.

It’s not just a matter of complying with a request from the United States.  At issue here is what kind of deteriorating law-and-order environment the nations around the Mediterranean are prepared to accept in order to accommodate trade in sanctioned Iranian oil.

There’s been enough lawlessness going on in Libya over the last eight years.  But Libya, now established as a known problem, is not at this point a venue for expansion of the maritime lawlessness, with its distorting patterns for law-abiding operations.

Ships have also been suffered in the past year to offload oil and fuel cargoes off Syria, in spite of the sanctions on both Syria and Iran.  But that too is an established problem, confined to Syrian territorial waters and not obtruding the patterns that go with sanctions busting – bribery, graft, impact on legitimate industries, institutional corruption (e.g., of coast guards and navies), risk of hot lead – into other waters.

Turning a blind eye to Iranian sanctions-busting in Greece’s waters, or Turkey’s, or Cyprus’s: that’s another matter.  (Lebanon will not be left to make any such decision on her own.  Whether interdiction is by Israel or the U.S., it won’t be Beirut’s call.)

The Mediterranean nations will have to think long and hard about whether they want to turn into the Persian Gulf as it operated in the Saddam sanctions years between 1991 and 2003.  Iran made a lot of money and financed a lot of terrorism and arms proliferation through participating in the sanctions-busting ring that grew up around the sanctions on Iraq.

In the Mediterranean, if central governments decide to “passively” cooperate in such a ring, they’ll be opening the door to forms of crime and institutional decline they haven’t had to deal with for many decades.  If they imagine they’ll easily remain in charge of the problem, they’re in for a nasty surprise.  (Just for starters, this dynamic would be too juicy an opportunity for Russian crime syndicates to ignore.)

Or, the nations of the Mediterranean can choose to just participate openly, as policy, in breaching the EU’s own sanctions on Syria and the U.S. sanctions on Iran.  The political untenability of that approach would be hard to face down.

Sooner or later, the cost of aligning with radical Iran comes home.  It’s not unrealistic to hope that Turkey, even under Erdogan, will see the wisdom of not letting a bad pattern get started.

On Friday, the New York Times reported that U.S. sources confirmed Israel had attacked Iran-backed forces in Iraq; specifically, shipments of missiles from Iran that would enable the Iran-backed militias to strike at Israel.

This follows up a report from weeks ago that mystery air attacks on these shipments may have been conducted by Israel, possibly using drones.

I continue to assess that drones are the most likely attack platform, rather than manned aircraft.  In a quiescent air defense environment, a drone whose controller can use a visual sensor to identify the desired target – e.g., a shipment of missiles on a parking pad – is a perfectly suited weapon system.

The drone(s) might be launched from Israel, but more likely has been launched from Syria; probably from the remote, U.S. coalition-controlled area around At-Tanf, at the border with Jordan.  That would give the drone plenty of legs to get the job done inside Iraq.

The U.S. confirmation is from anonymous sources, but comes after Benjamin Netanyahu all but confirmed Israel was behind the attacks.

U.S. embedded as a thorn in the side of Iran’s land bridge

There is a pattern here of the U.S. using our national posture in the region to counter Iran’s moves, not just at a distance but from positions of direct opposition inside areas where Iran is seeking to exert the dominant influence.

Iraq is one place.  Remaining engaged with the central government there, and being in the country, gives us a position we would not otherwise have from which to undermine Iran’s push into Iraqi territory.

To say that is not to say that this position of leverage has already had a decisive effect.  It’s to point out that we have the position. We also have such a position in eastern Syria, and together with the position in Iraq, we are thus enabled to hold Iran’s land bridge across Mesopotamia at risk.

Another location is Lebanon – also directly relevant to the land bridge.  I am as frustrated as anyone at the seeming blind eye the U.S. continues to turn to Hezbollah’s effective control of the Lebanese Armed Forces.  That said, I’m not convinced that it would be better to either drop Lebanon as a client, or try to force the issue of internal control in Lebanon, as a singular, de-contextualized priority.

As things are, the U.S. has a level of privileged access to the coalition government of Lebanon and the operations of the LAF.  If we are watchful and circumspect, that is an advantage for us and a disadvantage for Hezbollah’s patron Iran.  It also keeps the LAF from ending up wholly clientized by, say, Russia, which would not by any measure be better for U.S. interests.

Trump is particularly constrained in what he can do at the moment, with a Democrat-controlled House of Representatives.  The Authorization for the Use of Military Force that we’re still operating under – the one designed for the “Global War on Terror” – doesn’t justify going further than what Trump is already doing.  He can’t use it to justify breaking more china in the Middle East in order to set everything right in a six-week campaign.  Nor do I think the American people have an appetite for such a program.

None of that means we can predict for certain what will come of maintaining a position in the region from which we can hold Iran’s moves at risk. Only time will tell if it has been a wise investment.  It looks very Trump-like, however, from what I can see, and appears to be a conscious investment with a vision, rather than pointless lawn-tending in a strategic vacuum.

It’s one prong of a multi-pronged effort to put pressure on Iran and hem her radical regime in.  One effect it has already had is facilitating Israeli interdictions in Iraq on a basis of near-undetectability and effective anonymity.  Without the U.S. presence in locations useful for that purpose, Israel couldn’t have brought that off.  Having to plan and execute massed, one-time air attacks with more overtly-operated, detectable strike-fighters would be a different political proposition, forcing political decisions from other nations that would probably run to Israel’s detriment.

If keeping us in this modest, archipelagic position around the region were the only measure in force, that would be one thing.  But Trump is using other instruments to exert significant pressure on Iran.  This is a backstop, for the moment.  It’s pretty clear he’s not going to just give up.  It isn’t a cop-out to suggest giving it time. 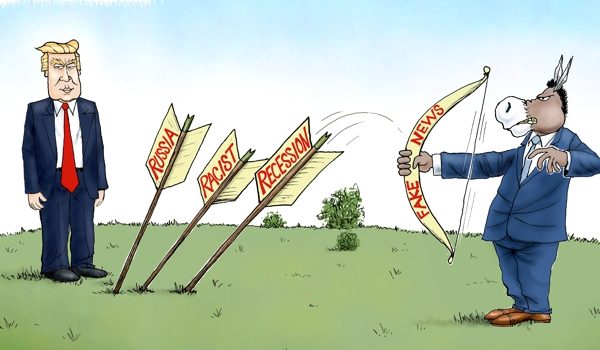 Cartoon of the Day: The Three R’s
Next Post
Search continues for missing 3-year-old migrant boy along Rio Grande