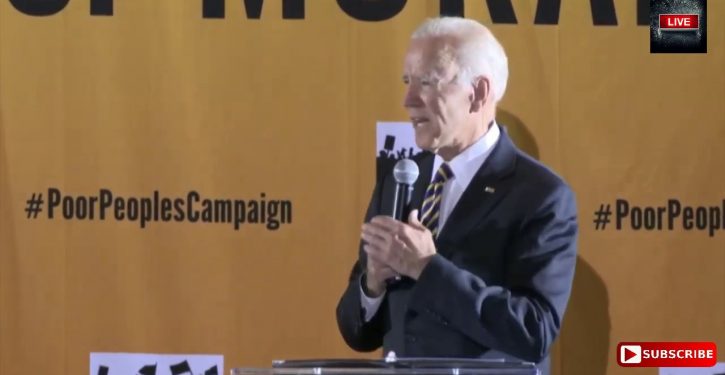 At least you can’t accuse him of not “telling it like it is.” On Friday, presidential candidate Joe Biden admitted before a crowd of prospective voters in Hanover, N.H. that the healthcare plan he would offer as president was “not quality”:

Joe Biden in Hanover, New Hampshire on his health care plan: "We’ll make sure it’s not quality. We'll make sure it's only affordable."

Yes. You read that right. pic.twitter.com/218chQlIeA

Moments later, he walked back his own promise of affordability, assuring rank and file voters that their health insurance premiums would increase:

And for folks in the working class … they will, in fact, we’ll increase their premiums, excuse me, the will increase the generosity of the premium tax credit they now get.

Joe Biden in Hanover, New Hampshire: "For folks in the working class … they will in fact will INCREASE THEIR PREMIUMS.” pic.twitter.com/qDMzOjqgIR

None of what he said is obviously what he meant, though it is becoming increasingly hard to know what the former vice president means as he stumbles over his words and thoughts. On Thursday, for example, he said this while campaigning in Virginia:

I think there’s a friend that @JoeBiden’s known a long time in and out of public life. . . Just helping translate this. pic.twitter.com/7jbXxAJ9jU

As for his gaffe on health care, the mistake comes inconveniently only a few days after his wife acknowledged publicly, “Your candidate might be better on, I don’t know, health care, than Joe.” Judging by his description, who could be worse?