Finally, we have a credible account of what it takes to buy a gun at Walmart; at least, at a Walmart in Virginia.  (Your experience is likely to vary depending on the state you try to buy a gun in.  For reference, Virginia is a comparatively easy state to buy a gun in.)

The account comes not from a lyin’, cheatin’ gun-rights monger who’s just going to lie about it.  It comes from a journalist who knew nothing about guns before deciding to test the proposition with a gun purchase at Walmart.  So we know we can trust this account.

Before summarizing it, however, I need to summarize my own account of the separate transaction often compared unfavorably – in terms of time consumption and convenience – to buying a gun.  That transaction, of course, is buying cold medicine, or, in Parkland activist David Hogg’s latest formulation, cold pills.

It’s harder to get cold pills than an AR-15.

Something needs to change.

It is fortuitous that I have this experience to offer for comparison at this time.  The comparison will lack a little empirical integrity, partly because this test, conducted at Walmart, couldn’t replicate the exact conditions specified in David Hogg’s tweet.  Walmart doesn’t sell AR-15s.  However, the utility of testing attempts to purchase two relevant items Walmart does sell — other types of guns, and cold pills — made this a worthwhile pairing.  If Walmart did sell AR-15s, the policies and controls on their purchase would be the same as for the guns Walmart does offer.

The slight integrity bleed is also partly because journalist Hayley Peterson doesn’t record the exact number of hours the still-uncompleted gun transaction has cost her.  I, on the other hand, am able to state within plus-or-minus five minutes how long it took to buy cold pills.

I bought them at Walmart too, which I don’t usually do.  Fortunately, I don’t have to buy them often – maybe once every other year or so – and what matters more than saving a couple of bucks is having no line to wait in at the pharmacy service counter.  So I usually go to a high-priced pharmacy if I need to make off with some pseudoephedrine to dry up the nasal passages in order to get through my waking hours.  (Talk to the hand about loratadine.  It might as well be a cube of sugar, for all the good it does me.  At the Last Judgment, the fate of the people who killed Drixoral with the anti-meth-cooking restrictions is going to be unwatchable.)

But my most recent purchase coincided with a Walmart visit to stock up on household supplies, which was coming to an end just as the pharmacy was putting up its metal rollers in the morning.  The timing perfected itself.

I note, for comparison with Ms. Peterson’s gun experience, that all Walmart Supercenters have pharmacy departments.  So there was no issue prior to this purchase with locating a suitably accoutered Walmart.  Any old Walmart Supercenter would do.

The time saved (i.e., versus buying a gun from scratch) seems to be about four hours on that score, and probably more, since Peterson’s gun-purchase expeditions have numbered two so far, to a Walmart 30 minutes away.  The Walmart I was shopping in is eight minutes from my house.

The last soap and toothpaste-type items piled in my basket, I plucked a fully-leaded-Sudafed card from the rack and went to present it at the pharmacy service window.  One person had beat me to the service line.  This meant a wait, but there were two people behind the counter.

After a brief interlude in which the two pharmacy workers conferred over the other customer’s order, the second one retrieved a box of Sudafed for me.  It turned out to take about ten minutes from stepping forward with the card and presenting it, to paying for the cold pills.  With ID swiping and payment included, the whole transaction went off without a hitch, requiring about 12 minutes.

I proceeded after that to buy my basketful of other items in the main checkout area, which took substantially longer.  With the extra pharmacy bag, I did have to spend about five seconds on the way out the door to allow the Walmart greeter to scan the receipt.

If you would like a description of where different departments were in the store – something Hayley Peterson thoughtfully provides – I’d be happy to go into that in the comments.  I don’t have any photos to illustrate this expedition.  But the pharmacy was located where it usually is, to the left (or, in some Supercenters, to the right) of the banks of main doors, with its service window facing the major cross-aisle at the front.

Adding the 12-minute transaction time to the 16 minutes of the round trip from my house, plus a minute either side for the walk through the parking lot, and having no other prep or research time to factor in, I was able to complete this transaction in 30 minutes.

Granted, I did have to have a driver’s license.  But the $50-odd cost of that every five years is amortized to $10-ish a year, and dwindles to nothing when spread over all the other requirements it facilitates, starting with driving.  Feel free to add a penny or two, if you like, to the approximately $11 the Sudafed cost.

A key difference between the two transactions, as documented by me and Ms. Peterson, is that I came home with cold pills on the first try, and she still doesn’t have a gun.

That’s a rather decisive difference, in my view.  But it’s not the only one.  Peterson had to figure out which Walmart might be selling guns, and was unable to do that with a straightforward online search or by calling Walmart, either at a central service number or store by store.  She was able to deduce from online comments that a store about 30 minutes from her sold guns, and went to make a purchase there.  She eventually learned that ATF offers an online list of federally licensed dealers (something experienced gun owners already know).

Her first trip came up empty, because there was no federally licensed gun salesperson in the store that day.  The sporting goods department manager told her which day to come back on, in order to proceed with the gun-buying attempt.

Peterson returned two days later, at this point out about an hour and a half of driving time and perhaps a minimum of two hours of prior research time.  Add in about half an hour in the store on the first trip, based on her description of events (including the helpful orientation to the school supplies aisle, and the toy and bike departments).

The licensed salesperson was available on the second visit, and Peterson was accorded a hands-on encounter with a gun – retrieved from the locked case behind the counter – and given the firearms application to fill out.  She turned over the application, with a $2 fee, to await the background check.

But she was no longer living at the address on her driver’s license, and of course that, in the absence of other verification of current, valid address, stops a firearms purchase dead in its tracks.  Peterson learned she would have to come back with verification of address to continue with her purchase.

She says she has gone far enough with the process now to form a judgment, and doesn’t need to complete a transaction.  With the 30 minute trip home, and what I’m guessing was probably about 45 minutes in the store on the second visit, her cost in time would seem to be about five and half hours, spread over two days.  Add in the $2 application fee (plus a penny or two, your call, to cover the cost of a driver’s license ID), and that’s the total investment she’s put in so far in order to not have a gun in her possession.

That, it’s important to note, is because she was trying to buy a gun in Virginia.  In some other states, you have to first obtain a license from a state agency to buy and/or own a gun (separately from getting a carry license), which may require a government-approved, documented safety course and can run to hundreds of dollars and months of processing time.  State licenses typically require a visit to the agency before attempting to purchase a gun; licensed gun dealers will then also enforce these state laws at the point of sale, as they do federal law.  In other words: no state license, no gun sale.

But the comparison is serviceable enough even with a state like Virginia.  I’m especially proud that we were able to offer this comparison of two purchase transactions at Walmart, rather than having to make do with cold pills from a Rite-Aid and a gun purchase attempted at a gun store.

Peterson did at least compile some conclusions about failing to buy a gun:

Overall, the experience left me with the impression that buying a gun at Walmart is more complicated than I expected, and that Walmart takes gun sales and security pretty seriously.

Here’s what led to that impression:

Contrast that with my conclusions about buying cold pills.

U.S. reportedly denies visa to … Boris Johnson’s girlfriend?
Next Post
Vendetta: CNN wants to get Sean Spicer blacklisted from ‘Dancing with the Stars’ 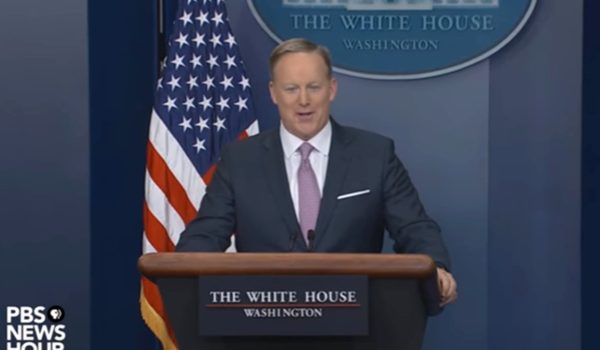