Maybe it’s the stress of being on the campaign trail or having to flip-flop continuously over your most deeply held convictions, but former Vice Pres. Joe Biden has become increasingly cantankerous of late. On Thursday, while at the Iowa State Fair, he snapped at a coed for asking him a question he should have had an answer to but didn’t, ultimately grabbing her arm. There is no word on whether the young woman plans to prefer charges for battery.

Later the same day, candidate Biden was confronted by Joel Pollak, host of “Breitbart News Tonight,” over the senator’s recitation of the well-peddled leftist lie that Donald Trump had said of the clash between white supremacists and Antifa in Charlottesville, Va., in 2017, “There are some very fine people on both sides.”

When Pollak corrected Biden on that point, the candidate became noticeably testy. Watch:

Trump said: "I'm not talking about the neo-Nazis and the white nationalists, because they should be condemned totally"

So who’s right — Pollak or Biden? As sports reporter Warner Wolf used to say, “Let’s go to the videotape.”

Here is the video of Trump saying it: “I’m not talking about the neo-Nazis and the white nationalists, because they should be condemned totally”

Here is a transcript of the president’s exact words:

You know what? It’s fine. You’re changing history, you’re changing culture, and you had people — and I’m not talking about the neo-Nazis and the white nationalists because they should be condemned totally. You had many other people in that group other than neo-Nazis and the white nationalists, OK? And the press has treated them absolutely unfairly. In the other group also you had some fine people, but you also had troublemakers, and you see them come with the black outfits, and the helmets, and the baseball bats: You had a lot of bad people in the other group. [Emphasis added]

What say you, candidate Biden?

Flight logs show Bill Clinton flew on sex offender’s jet much more than previously known
Next Post
Cartoon of the Day: With friends like these… 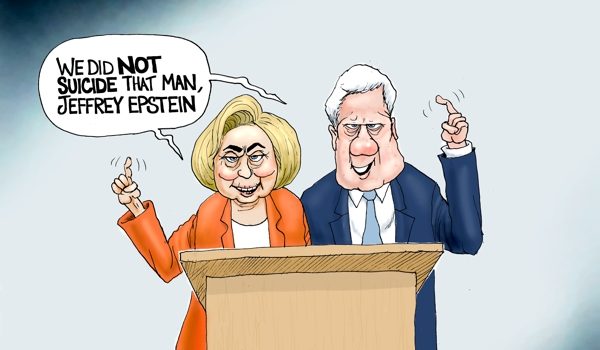