A new theme is zooming around the Web: that Congress asked the U.S. Department of Justice for statistical information on the source of domestic terror attacks, and the DOJ was “unwilling or unable” to give Congress a “government document” that contains the information.

Yahoo News did the honors of issuing the report on this.  We’ll see if other mainstream media pick it up.  It’s getting lots of play on social media.

White supremacists were responsible for every single incident of domestic terrorism in 2018, according to a government document that @TheJusticeDept was “unable or unwilling” to give to Congress. They knew—and they just didn’t tell anyone. It’s now public. https://t.co/n6rOS4BoKa

Jamil Smith’s tweet indicates that the big takeaway from the government document is that “White supremacists were responsible for every single incident of domestic terrorism in 2018.”

According to the Yahoo News article, Senator Cory Booker (D-NJ) was ready with a prompt reaction to the emergence of this document.

“I’m troubled by the lack of transparency, given that we haven’t received this critical information after several requests to the FBI and DOJ. They cannot and should not remain silent in the face of such a dangerous threat,” Sen. Cory Booker, D-N.J., wrote in an email, after being told about the data.

Yahoo News has yet to explain how the document has “become public,” but does record for us the reaction of an aide to Senator Dick Durbin (D-IL) as well.

An aide to Sen. Dick Durbin, D-Ill., who is also on the Judiciary Committee, said it was “disappointing” to discover the Justice Department has information it has been “unable or unwilling” to provide to senators.

“This is disappointing but unfortunately not surprising. In April, the Justice Department and the FBI briefed Senate Judiciary Committee staff on domestic terrorism, nearly six months after Sen. Durbin’s office first requested the briefing,” the aide said. “At the briefing, the DOJ and the FBI were unable or unwilling to provide precise data on white supremacist terrorism, and neither agency has responded to our repeated follow-up questions since the briefing.”

What is the document?  It is titled “Domestic Terrorism in 2018,” it’s “dated April 15, 2019,” and it “was prepared by New Jersey’s Office of Homeland Security Preparedness, one of the main arteries of information sharing, and sent throughout the DHS fusion center network as well as federal agencies, including the FBI.”

In other words, it’s a document prepared by an agency in the state of New Jersey.

You can download the PDF of the document here.

The first thing you’ll notice about the document is the disclaimer on the download page, which reads:

All information was derived from publicly available sources.

The second thing you’ll notice is that the document consists entirely of the graphic presentation embedded using Scribd at the Yahoo News site.

It’s one page, and the one page is the graphic.  It lists each of the domestic terror crimes it cites, with identifying info on the perpetrator and arrest date.  It maps them all by location.  What it doesn’t do is provide any source information on the attacks, such as links to either media reporting or law enforcement information, or even just citations.

It would be childish in the extreme to complain that the criticisms here of the Yahoo News scoop are about denying the reality of “white supremacist” violence.  I trust no one will express such a silly reaction.

The point is that this is not a document the DOJ has any business forwarding to Congress, and we may be grateful to the level heads at DOJ for refraining from doing so.

This is not to impugn the New Jersey OHSP’s work, which I am sure was done in good faith and represents their best assessment.  But it’s not the DOJ’s or FBI’s work. As such, it would not be responsive to a congressional request as the DOJ has every reason to interpret it.  When the Senate asks the DOJ for data, the Senate either (a) does not mean “Please provide us with a graphic presentation of publicly-available information from a state agency in New Jersey,” or (b) will say so if that’s what the Senate does mean.

We can also note in passing that there may be a reason Senator Booker, D-NJ, was able to provide a reaction to the media with such alacrity.  The suspicion does intrude that he was already aware of the NJOHSP graphic.  Perhaps he had special alertment to it.

But he didn’t really need it.  That’s the other thing you’ll note about the document.  It isn’t “becoming public” in August 2019.  It’s been public since it was placed online, apparently – according to the page source information – on 15 April 2019. 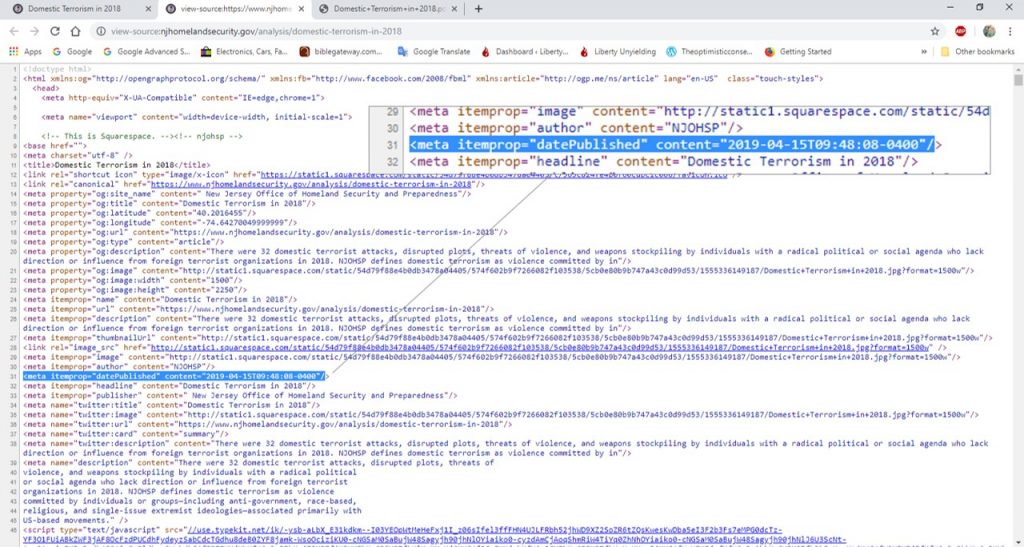 Lindsey Graham promises if Trump, Republicans win in 2020 they’ll repeal Obamacare
Next Post
Joe Biden didn’t just ‘misspeak’; he provided a window into the kind of person he is