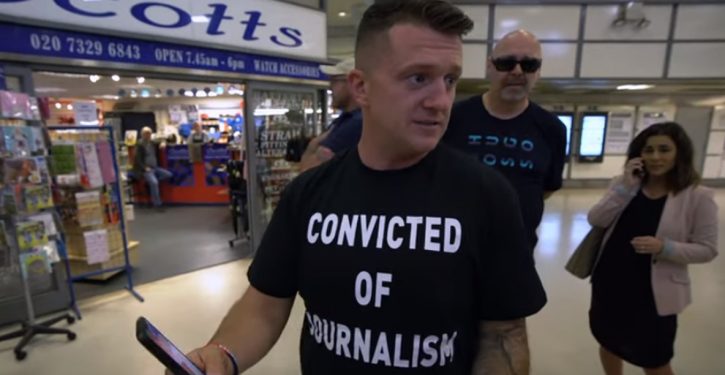 Western elites have mastered the Soviet arsenal of repression perfectly.

The report in July stating that Tommy Robinson was transferred to the special, high-security prison of Belmarsh in the South of London, which has been described as “jihadi training camp,” has brought an ominous sense of déjà vu to me.

In the 1990s, we learned a gloomy story about N. (full name withheld for privacy).  In the USSR, N. was a dedicated Zionist, and together with other Zionists and religious Jews he was trying to immigrate to Israel. However, unlike many others who were pressured into a cooperation with KGB (for which they are not to be blamed in any way), N. stood steadfastly and uncompromisingly. And as a result, the KGB sent him not to a solitary cell, like the one in which Natan Sharansky was detained, but to a common one – together with criminals. Day by day he was subject to violence – physical, verbal and sexual. N. survived unspeakable humiliation, and even many years after that in Israel he could not recover completely from the horror he had experienced. “The System” knew how to break a man.

Modern pseudo-democratic regimes have learned the post-Stalinist Soviet arsenal of repressions perfectly. The first and foremost of these lessons is simple: it is not necessary to murder a person, especially in the name of the law.  Murder would give them a halo of martyrdom. One should only deprive them of their will and instill fear in the hearts of their followers. This practice has been widely used against dissidents, nationalists, etc.

The second fundamental lesson is that the regime itself should not be directly implicated in the worst tortures. The “dirty work,” wrote Aleksandr Solzhenitsyn, should be done by “socially allied elements.” In the USSR, these were criminals who collaborated with the authorities and got privileged positions as a result.

In the case of Tommy Robinson, that role goes to “jihadists” in prisons. Thus, the authorities are not only relieved of any responsibility, but they can assert that any violence against “an enemy of the democracy” (“fascist,” “racist,” etc.) is a spontaneous manifestation of indignation. Even if the person is not subject to violence, the very fact of being placed in such an environment is an unambiguous hint to him and his supporters.

Anyway, nobody knows or will ever know… As we remember, the “far-right extremist” 35-year-old Kevin Crekhan, who made a joke by leaving raw bacon on the threshold of the mosque of Bristol in 2016, died in prison under suspicious circumstances from a so-called “drug overdose” in 2018. These “mysterious deaths” are very well known to everybody who lived in the USSR.

Prison may have different functions. It can be a repressive apparatus in relation to some people, and a place for training “future cadres” in relation to others. And as Stalin liked to say, “Cadres decide everything.”

Modern “socially allied elements” are detained in privileged conditions – not only in England but throughout the Western world.  That includes Israel, where Palestinian terrorists have some of the amenities of a four-star hotel, with plenty of food, libraries and television, surrounded by their comrades, having the right to study through distant learning, entitled to regular visits of their relatives, etc. They can study the Quran, practice jihad sermons and maintain contact with the outside world. For “enemies of the nation” (once again, the term was widely used by Stalin) there are completely different conditions: obscurity, lack of any comfort and life in perpetual fear.

Using prisons as a means of intimidating dissidents is not the only thing that the Western establishment has adopted from the Soviet repressive apparatus. Another powerful lever is informal social groups used to fight against “enemies of the nation” (today’s “fascists,” “racists,” “supremacists,” and so on).

In my youth, in the mid-1980s, so-called “Lyubertsy Squads” appeared in Moscow.   These were named after the city of  Lyubertsy, an outer suburb of Moscow, where they originated from. They were well-organized groups of young men going in for hand-to-hand combat, boxing and martial arts. Well-coordinated and disciplined like wolf packs, they scoured the streets and public transportation system tracking down representatives of the informal youth culture — hippies, heavy metal music fans, punks, etc. Having found them, they beat them brutally. The Lyubertsy Squads had their own anthem, songs and uniform – bold plaid pants and leather jackets. In a short time, they reached far beyond the boundaries of Lyubertsy and the Moscow area in general. Everybody knew that they were supervised by the KGB, which used them to fight against “aliens to Soviet cultural elements” [or “elements alien to Soviet culture”].

Today, in almost all Western countries, you can discover militant “informal” groups that systematically engage in intimidation of opponents.  In the USA these are, for example, Antifa and the New Black Panthers, which have some cross-over with Black Lives Matter. The mass violence at Berkeley was just a beginning. This was followed by a series of actions of intimidation. During the events in Charlottesville, even the reporter for New York Times Sheryl Gay Stolberg admitted seeing “Club-wielding ‘antifa’ beating white nationalists being led out of the park.”

In August last year, they even beat a supporter of Bernie Sanders, who came out to demonstrate against fascism with an American flag. The reason?  “The US flag is a symbol of fascism.”

In October 2018, their victim was John David Rice-Cameron – the Republican son of Susan Rice. The incident happened at a rally in support of Brett Kavanaugh at Stanford University.

On June 30, 2019 conservative journalist and editor of Quillette Andy Ngo and three civilians were assaulted with weapons by Antifa’s activists in Portland. It is not surprising that Ted Cruz requested to add Antifa to the list of terrorist organizations.

In Germany, local Antifa militants organize periodic pogrom-like attacks on the “enemies of progress.” Their last object was Drei Kastanien restaurant in Leipzig in January this year, where AfD (“Alternative For Germany”) activists liked to gather.

There are Muslim “Sharia patrols” in almost every Western country, which detain, search and demean everybody whom they don’t approve, as the Lyubertsy did. And, like the Lyubertsy, they receive poorly disguised support from the authorities and the establishment.

The streets of several German cities, including Stuttgart and Munster, are patrolled by Muslim bikers led by Marcel Kunst (now Mahmud Saddam), who converted to Islam. Practically everywhere you can hear about “Sharia police”: in Germany, Great Britain, New York, France, Sweden. They are presented by the media as an innocent and even praiseworthy initiative, aimed firstly at strengthening people’s sense of security (oh, my God!), and secondly at promoting cultural enrichment. In the Soviet ideology this is called “strengthening of the ideals of communist society.” Socially allied elements have become an integral part of the “Apparatus.”

Can the people of the West change the situation? Yes, they can. There is still a window of opportunity. They can vote for the truly right-wing parties; they can go to demonstrations as courageous people in Eastern Europe and the USSR did (and continue do today in Russia); they can publish open letters, as dissidents did.

But first of all one has to understand and recognize the main thing: the current political system in the West is not democracy, as a general matter, and, of course, not “liberal democracy” in Alexis de Tocqueville’s terms.  This is a perverted cultural totalitarianism of a new type wrapped in beautiful slogans, using pseudo-Soviet rhetoric and Soviet repression tools to intimidate anyone who dissents and doubts, turning them into “consumer plankton.” The ideas of freedom, liberal values and democracy are at the mercy of the militants of Antifa, BLM, “Sharia patrols” and the “jihadists” of Belmarsh prison.  Welcome to anti-Utopia. 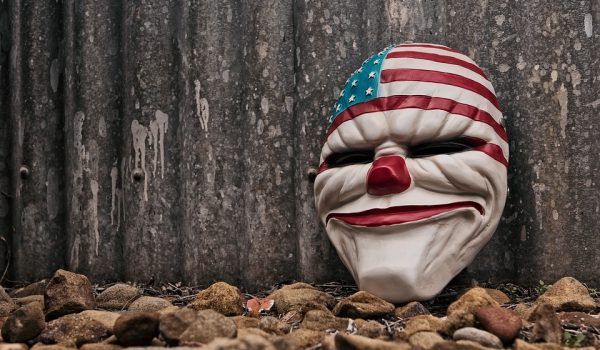 Is ‘white supremacy’ replacing ‘racism’ as the Left’s new knee-jerk reaction?
Next Post
Cartoon of the Day: Assault weapons 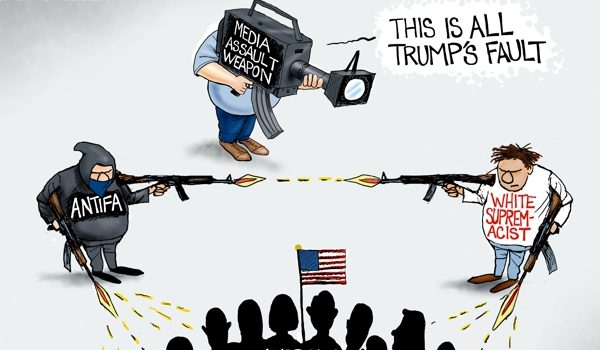