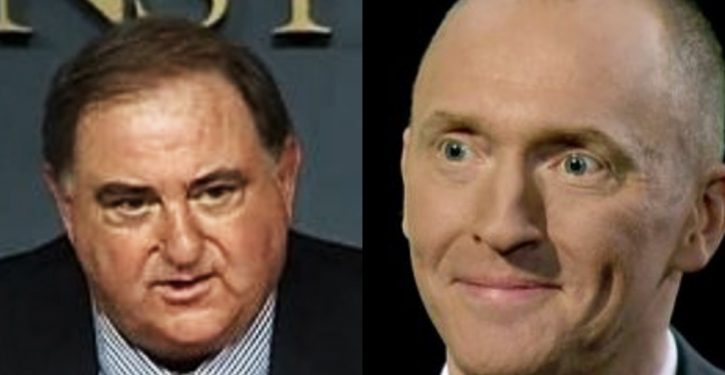 On Sunday morning, 28 July 2019, Rep. Devin Nunes (R-CA) spoke with Maria Bartiromo on Fox News and emphasized a name to her: Steven Schrage, an American with a background in politics and government who organized the conference at Cambridge University in 2016 at which Carter Page met Stefan Halper.  Nunes raised the name with Robert Mueller during Mueller’s testimony before the House Judiciary Committee.

Nunes said that Steven Schrage (pronounced shrah-gee, with a hard “g”), had actually invited Page to attend the conference.  Its dates were 11-12 July 2016, and the administrative information on it seems to have been developed in late May 2016, when Madeleine Albright was confirmed as the keynote speaker.  (The first tweet about it was on 26 May 2016.)  Early June is when Carter Page was reportedly contacted with an express invitation.

On Sunday morning, Nunes made the point that we need to know more about Schrage and why he invited Carter Page to attend the conference.  And so we probably do.

After sifting information available online, however, I have to say it looks like the answer to why Schrage invited Page is a pretty simple one.  He was put up to it, by people who knew the conference was being organized.  Those people included, at a minimum, at least two personalities who have been of interest to us in the Spygate drama: Stefan Halper and Richard Dearlove (former head of MI6), both of whom were featured speakers.

Schrage organized the conference.  He was a doctoral student under Halper’s wing at the time.  The big clue to the nature of the conference is found in the Facebook announcement posted by Schrage.

The full name of the conference was “BREXIT and the Next U.S. President – 2016’s Race to Change the World Conference.”  Schrage posted the Facebook announcement with the list of confirmed speakers at the European Political Science Association page on 29 June 2016.

The BREXIT vote was held 23 June 2016, and by 24 June it was clear it had not gone the way the Dearloves and Halpers of the world wanted it to.  That event came on top of the impending selection of Donald Trump as the GOP candidate in the U.S. election, which had become clear about three weeks before the first tweet on the conference at Cambridge on 26 May, and may have increased the urgency of attendance for at least some of the participants.

Aside from questions like what exactly the senior participants did at this hog fry (emergency conferences during big election years seem kind of weird as purely academic exercises), we can speculate that a key purpose was to issue strategic invitations that would bring in people from the Trump and Clinton campaigns in the U.S., and the BREXIT and Remain contingents in the UK, and have a tailored plan for interacting with each party.

Chuck Ross at the Daily Caller News Foundation reports that Stephen Miller was another Trump campaign figure who got an invitation via Schrage.  As Ross says, there were no speakers or named individuals from the Clinton campaign (although I note that Albright was a senior adviser to the campaign).  Beyond that, we have no easy insight from here into the invitation list.

It’s also interesting to note Ross’s additional point that Schrage invited Page by email on 7 June 2016.  That was a very active time in the – what do we call it – outreach effort to the Trump campaign, two days before the Donald Trump, Jr. meeting in Trump Tower, and in the midst of the solicitation saga for it.

According to Ross, Schrage also appeared at the Republican National Convention in July 2016, just a week after wrapping up the conference in Cambridge.  Apparently, the folks in Cambridge were very interested in what might go on in Cleveland.  Schrage made contact with Carter Page again there.  Pursuing Page from early June to mid-July certainly has the appearance of more than happenstance.

A little string-pulling leads to an old, familiar figure

There is actually a lot to unpack from Schrage’s biography, which includes having been the chief of staff for Senator Scott Brown (R-MA) after Brown’s election (in 2010); having worked on the Romney primary campaign in 2007-08; and serving as Deputy Assistant Secretary of State for International Narcotics and Law Enforcement Affairs under George W. Bush.  Oddly enough, this was the same job held by Spygate figure Jonathan Winer from 1994-1999.  Schrage’s online presence is unusually lacking in dates for professional employment, so it isn’t clear exactly when he assumed that post, but based on State Department event records, he was in it as early as September 2002.  (Chuck Ross puts the appointment in 2002.)

But I’ll focus here on one aspect of Schrage’s record, which involves a long-time CIA associate of John Brennan’s.  During the Romney primary campaign in 2007, Schrage introduced a man named J. Cofer Black to Romney.  Schrage would have known Black, at a minimum, because they held positions at the State Department at the same time: Schrage as a deputy assistant secretary with the international law enforcement portfolio, and Black as an ambassadorial level senior expert on counterterrorism.

Black moved into that position in 2002 and held it through 2004.  Before that, he was the long-time chief of the CIA Counterterrorist Center (CTC), including at the time of the 9/11 attack.  The CTC was reorganized as a more broadly-based federal agency in 2002-03, passing, post-9/11, through a period as the Terrorism Threat Integration Center (TTIC), and with the creation of the Director of National Intelligence/ODNI becoming the National Counterterrorism Center (NCTC) by 2004.

Alert readers may remember that John Brennan headed the short-lived TTIC, and was the interim first director of the NCTC in 2004-05.  In effect, he took over Black’s job, and Black moved to State.

As a top official for CIA Director George Tenet, Brennan knew Cofer Black well prior to that transition.  In 2005, Brennan moved on to join the private company The Analysis Corporation (TAC), around the same time Cofer Black left government service to become a vice president at Blackwater, the Erik Prince firm.

Brennan’s firm would go on to win big contracts for classified data analysis and processing at the NCTC and FBI; i.e., becoming a contractor bullpen for manning intelligence community computers at both agencies (see Brennan link above; see also here for UK connections relevant to that point).

Black (no connection to the company name) was with Blackwater from 2005 to 2008.  In 2007, he was introduced to Romney by Schrage, and ended up advising the Romney primary campaign on counterterrorism matters.

Black advised the Romney 2012 campaign as well.  He also had a continuing role with Erik Prince’s enterprises, becoming chairman of the Prince-owned Total Intelligence Solutions firm, which was formed in 2007.

Along with Carter Page, I think there will be time enough to speculate on the exact nature of Steven Schrage’s role and interest in the events of 2016 after we have more information about it.  One thing that stood out for me from his bio, however, is that Schrage was awarded a chair at a prestigious institution without having yet obtained a Ph.D.  He assumed the Scholl Chair in International Business at the Center for Strategic and International Studies (CSIS) in 2009, presumably on the strength of his work at the State Department, along with a trade-relations role in the Bush 43 transition team in 2000.

In 2016, Schrage was in Cambridge pursuing a Ph.D.  Chuck Ross has this to say, along those lines:

At Cambridge, Schrage studied for a Ph.D. under Halper, whose career path in academia, politics and government bears striking similarities to Schrage’s.

I had the same thought, surveying Schrage’s biography.  Schrage seems to have gone back and forth at the functionary level, offering – as noted above – curiously little now in the way of specific dates for his activities.  Halper’s online professional profile is similarly vague, especially in the 30-some years since he left a position in the Reagan administration.

The recurrence here of the counterterrorism thread in Spygate is noteworthy (i.e., as a reason why a number of individuals knew each other).  So is the oddly shadowy quality of personages like Halper, Mifsud, and apparently Steven Schrage.

There’s even a secondary-level whiff of the energy industry connections that go with Carter Page and George Papadopoulos as targets in the Trump campaign.  Cofer Black and Jonathan Winer both worked the same case involving the Indonesian state oil company Pertamina in 2004, Black as an official at the State Department, and Winer as an attorney with Alston & Bird, representing Pertamina.  Schrage was in Winer’s old job at State at the time, and since the case included a legal claim against U.S. companies, Schrage would have been aware of it, and probably worked it with both Black (whom he later introduced to Romney) and Winer.

An eye-catching aspect of the Schrage c.v., of course, is his connection to international law enforcement issues – a discipline that has cropped up over and over in the Spygate saga, from Christopher Steele’s role as a confidential source on the FIFA bribery scandal to the multifarious links of many personalities (e.g., Bruce Ohr, Peter Strzok, Glenn Simpson, even Carter Page) to fighting or reporting on Russian crime.

But then there’s the indirect link through a professional associate, Cofer Black, to John Brennan.

The last one is where I’d put the money effort in a probe of how Schrage came to issue the special invitation to Carter Page in 2016.  Whether Schrage knows Brennan personally or not, it’s a strong possibility that in 2016, Brennan, like Halper and Halper’s British associates, knew who Schrage was – and where, and doing what.

Left-wing ‘watchdog’ group that targeted Nunes, Trump officials paid Fusion GPS $140K for research
Next Post
Have you noticed that robots tend to be white? (Guess where this is heading)